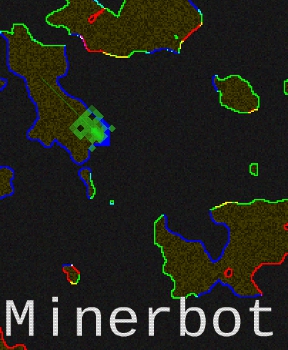 Being a robot is tough. If Killbot decides that he wants to stop killing and love instead, well, tough diodes. He's only programmed to kill. He can't even campaign to try to get new programming because that's Activismbot's job. Minerbot is another example - he's programmed to mine and that's what you'll be doing in this new arcade strategy game created by 31eee384 for the Ludum Dare 48-hour game design competition.

Steer Minerbot around with the [WASD] or [arrow] keys. Minerbot can dig through ore without a hitch, collecting it as he goes, but to rack up real points you'll want to press [Enter] to fire ore collectors. An ore collector will automatically gather all the ore of a given color from an area over time, but you have a limited regenerating supply of these tools so you'll need to use them carefully. Different colors of ore are worth differing amounts of points. You'll want to focus on gathering large amounts of valuable red ore, while worthless white ore is unaffected by your collectors and slows down Minerbot significantly if you have to burrow through it. You're being timed, so the key is to use your collectors to dig out "tunnels" of valuable ore that you can travel through to avoid having to dig through white ore.

Minerbot features a distinctive minimalist art style that might be confusing for the first couple runs. Once you get into the groove of the game, though, there's definitely an addictive quality to watching a collector hollow out a massive expanse of ore. The action's accompanied by a hopping techno soundtrack. All in all, Minerbot is a great way to waste a few minutes here and there. It's not the next epic journey through an alien world, but it's not like Minerbot is programmed for epic journeys. He's programmed to mine and mine he does. Even Activismbot can't protest that.

Is the time supposed to be so short? I only have 12 seconds, and no apparent way to extend it. Hardly enough time to do anything.

There is probably some bug - the timer interval is only 12 seconds long (on Kongregate the same game has 180 seconds long timer). At this rate I can barely reach some cavern in the timelimit...:(

Uh, there seems to be a bug: the timer is always set to 12 seconds.

Hmm, the author provided us with a version to host here at JIG, maybe there's an issue with our version. I've contacted him about it.

You now have 180 seconds to complete levels.

Very cool concept, though it wears out a little fast. I think I would prefer specifically designed levels with challenges to meet ("mine X amount of ore", "mine X amount of yellow ore", "mine more than a computer-controlled miner bot", etc.), but this is still a fun diversion for a few minutes.

The way every single cavity on every level is completely surrounded by more white ore than you can possibly dig through in the allotted time seems punitive.

What's the point of telling you to avoid it if you are perpetually surrounded by it, no matter what starting location you pick?

Like keith said, the gameplay is a good starting point, but it needs...well, more.

This game is broken for me.
The space bar doesn't register, but instead scrolls the page down.
I've tried clicking on the game multiple times,
either it can't take focus, or it is ignoring my space bar.

I'm using Google Chrome, and this is the first time I've had an issue with a flash game.

So, with most games it's obvious that a great deal of skill will get you an absurdly high score.

But it's pretty obvious with this game that, aside from getting very lucky and receiving a nearly all-red map... there's just no possible way to ever beat 8-10k in score.

So where the heck do the high scores of over 100k come from? Anyone want to guess how that's even possible?

This game needs not more, but less: less music. I turned it off completely; rarely have I come upon such an utterly annoying bundle of electronic whining. The game is loads of fun without it, though.

I get 50-70K consistently by mining every big vein in sight regardless of the color (Even so, I have too many collectors, so I place 2 of them on the really big veins to mine them quickly). No idea how people manage to get over 100K.

I'd say I get around 100k-120k in about 2 games out of 10. There's no special strategy or skill involved - if you see a large vein, place a collector. Doesn't even matter if it's valuable or not, as lower-value mineral veins tend to be larger, and collecting them clears up lots of space to make more regions accessible. Don't waste collectors. While waiting for collectors to re-spawn, mine a few stray red-or-yellow minerals yourself, from veins that are too small to justify a collector of their own. Mostly, whether you can get a 100k+score or not comes down to dumb luck - maps full of large interconnected veins and no walled off areas will come up eventually.

I like the concept. I think the music was ok; it's kind of chiptune-y, and I guess it's only for those that like that kind of music. To me, the in-level music sounded kind of like a rendition of the Canon in D.

I tend to get 50Ks, too. Vorpal's pretty much right on every point.

The dev's mentioned on Kongregate that he's planning on improving this in the next iteration.