Chess is one of those games that I appreciate from afar. When I see others playing it they look like intellectuals, but when I play it I feel as bright as a rock. My brother once won against me in less than one minutes. I thought I'd never enjoy a strategy turn-based game like chess until I tried BrickRoadDX's indie game Militia, which holds the elegant essence of chess, but done in such a way even someone like me will find themselves playing again and again. You start off with only two units, randomly placed on a board with enemy units scattered around. Your goal is to defeat the units with the stars on their pictures before you run out of turns, or before all your units have bitten the dust. You have two action each turn: moving and attacking. Clicking on your unit, you can see where they are allowed to move, and clicking again will show you where they can center their attack. Moving on a space with an enemy will remove that enemy from the board, but be careful with your main attacks, as friendly fire will kill them as well. The black brackets show where more enemy units respond on their turn, so clearing the board is never possible. Since all minions can only take one hit, you have to be careful where you're moving to, to make sure you use your precious supplies of turns and units in the most efficient way possible. 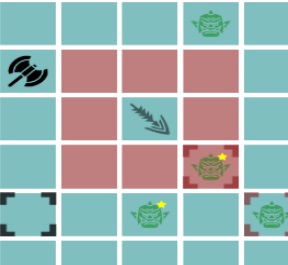 Militia isn't a dumbed down version of chess, it's just simplified. When you first begin, you'll probably find it pretty easy, but as you win more and more, you gain ranks, and with new ranks you get new units and new enemies. It will soon have your gears running full speed in your head. While hitting [H] gives you an idea about your men and the monsters, there is still a lot left to try and figure out. The best way to learn is to jump in and watch. You can click on your character twice to see how he attacks via red highlights. Putting your mouse over the red square will then pop up brackets that show where your attack will strike, but with the enemy's units you just have to learn. If you die, you do start over again in "level one", the easiest of the three levels which loop for a never-ending game, but your Rank stays the same or decreases slightly as a consequence, so you don't have to start ALL the way over. The slow build to high difficulties is a great thing in a strategy game like this. You learn as you go, and when you get into a challenge you're not ready for yet, you're brought back to a better rank so you can keep on enjoying it. Militia is now only available on Steam and with this new version comes a new mode call The Dark world, with even more heroes and enemies and starting in a much more difficult setting. Though fans of Milita may be a little upset they can no longer enjoy this game for free, Militia is a game with endless replay value that never becomes stale so it won't be a game left to collect dust in your steam library. That is, if you give it a chance it deserves.

Even with its simplistic design and gameplay, chess lovers and those who actively avoid such a game, will agree that Militia is a better version of that old classic board game.

It is an interesting game and I look forward to playing it more, but...not buying it as an improvement on chess.

This is a really great game. Pretty hard to figure out how the troops work sometimes, but that's the whole point I suppose. It's challenging, interesting, and it's satisfying to improve over time as I am better able to reason my way around the board. I recommend it!

Right, it is like chess in a lot of ways, but not an improvement. But I'm really liking it and totally addicted. Level 9 took a while to achieve.

"This game is still In Development and is not currently playable."

Whoops, looks like the developers have removed the playable build! I'll make a note of it.