Be honest. You always thought you would do a way better job of managing the Avengers than Nick Fury, but nobody would take you seriously because of your lack of an eyepatch and heavy reliance on pocket-protectors and spreadsheets. Well, my friend... THY TIME HAS COME. Double Fine Productions puts the power of the universe and earning projections in your hands with their free iOS strategic simulation Middle Manager of Justice. Your impeccable references and talent for bossing superheroes around lands you a job managing a branch of Justice Corp in a city constantly beset by supervillains, thugs, and flaming school buses. Since this particular location has seen better days, you'll have to work your way up by hiring and training an elite squad of powerful peeps, taking both them and your headquarters from zeroes to heroes in the process of saving the world and keeping really well-organised filing cabinets. 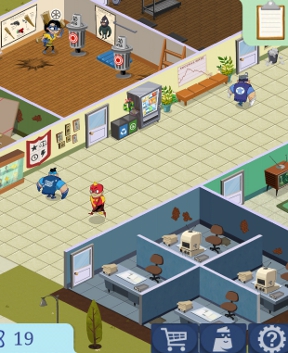 You won't start out with much, but with your skills you'll turn the place around in no time. Initially, all you'll be able to afford is a single superhero. The game walks you through the basics, but essentially you need Superium (earned through missions and objectives, or optional in-app purcharses) and plain ol' coins (earned by completing tasks, given by happy neighbourhoods, or nabbed by swapping Superium) to keep everything running smoothly and hire the real muscle. Once you've hired a superhero, you won't need to pay them again, but you'll need to pay for any extra equipment and items you want them to have. Cash also goes towards upgrading or purchasing new rooms when your Manager goes up a level, and these rooms can help research items and abilities, train your heroes' stats, give them a place to rest and relax, and more. Just tap on a hero to get a look at how they're doing, and then assign them to a station to reap the benefits. Remember to give them time to sleep if their health is low, or send them off to relax if their morale is suffering.

While most of the game takes place in your office training and managing your team, the city outside is a hive of scum and villainy and is constantly dealing with crime. Tap on the icon in the upper-left corner to view the city map, and tap on any crime to assign a hero (or heroes!) to deal with it. If you choose to watch the happenings on the Hero Cam, you can help direct your squad during battles by giving them items and directing them to use their special abilities, which do everything from boosting their strength to administering a good ol' fashioned beat down. Alternately, you can simply choose to delegate and let them fight it out themselves if you think they have a good chance of winning. Crimes can be anything from robberies to supervillain attacks, but you also have to contend with certain special events like fires that require a hero with a stat at a specific number or above to deal with, so make sure you're training everyone. 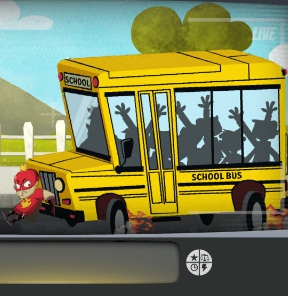 Analysis: Double Fine can always be counted on to make things both funny and full of character, and Middle Manager of Justice is not going to be the exception to that rule. From the easy, pick-up-and-go gameplay to the rich artwork and snappy dialogue, it looks and plays great and is something casual simulation fans will really love to spend a few minutes or half an hour with whenever they get a chance. Ultimately, however, what it really needs is some customisation. Being unable to decorate or lay out your quarters in anything but the most basic way is a bit of a bummer, but a bigger letdown is not being able to create your own heroes. Since most of them spout basic dialogue, it seems like something that would be both fairly easy to work into the game, and make players more invested in things. Especially since it feels like you spend a lot of time just waiting around and doing the same things over and over. Makes you look forward to the inevitable plot twist where Sweet Justice snaps from spending too much time knitting in the breakroom and punching trashcans and steals Captain Premium's teddy-bear, turning it into a 3-story tall steel-and-fluff monstrosity you have to team up with Skullface to defeat.

Considering the game is free, however, and the in-app purchases really are so unobtrusively and fairly integrated, Middle Manager of Justice is still a fantastic little game. Combat is easy to get the hang of, so even folks who aren't typically big RPG fans will be able to play, and it's great seeing your heroes slowly turn into an elite squad of death. Uh. And justice, of course. The villains are hysterical and likable, the plots are silly and engaging, and the whole thing is stamped with Double-Fine's signature commitment to quality. While it might not have enough to hold every player's attention for hours at a time, Middle Manager of Justice is a perfect example of how to make a quality freemium game that makes your players feel appreciated rather than like walking wallets. It's one of those games that will only get better as more updates roll out, and is the perfect choice for casual simulation fans looking for a fun, colourful game that lets them order men who wear their underwear on the outside of their pants around. What? I'm not judging. Much.