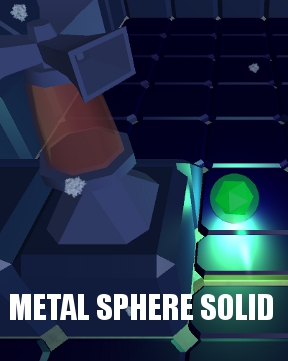 Euclid taught us that spheres are masters of espionage. Tactical espionage, that is. One might even say tactical espionage action. This is a basic property of the sphere taught in every high school geometry class... all the good ones, anyway... and it's put to work in Metal Sphere Solid, a new stealth action physics game made by Matthias Zarzecki. As a green sphere, your job is to escape from the base of the villainous Cuboids, rescuing your round brethren in the process. Use the [WASD] or [arrow] keys to move around. If a Cuboid sees you, it'll sound an alarm and the doors leading out of your current area will be locked down, which is bad news. What's more, there are plenty of spikes and mines lying around the area that will cause your sphere to explode into bits if you touch them; fortunately, these traps are also effective on the Cuboids.

The name of the game is stealth. You'll have to sneak past the Cuboids to reach your goals. Thankfully, it's possible to see their fields of vision, which makes tip-toeing about much easier. In some cases a Cuboid's vision might block off a path entirely. In that case, you'll need to find a way to covertly dispose of the block, such as by shoving it onto some conveniently placed spikes. All the while you'll need to remember that you're a sphere, so ramps and slopes might prove to be a problem if you're not careful. If this sounds like a bizarre concept, that's because, well, it is. Fortunately it's well executed and there's none of the frustration that indie stealth games tend to cause. If you're caught, it's always your own fault rather than a problem with the game being cheap or too difficult, and since you can reset the area by hiding being caught isn't the disaster it often is in other stealth games.

Metal Sphere Solid is a short game that can be completed in five to ten minutes, but it's still an innovative take on the stealth genre. A longer game of this nature would be great, but everyone with a bit of time to spare should give Metal Sphere Solid a shot. It certainly beats geometry class!

Initial impression: poor design. You can easily go where you aren't supposed to right from the start, fall off the map, and wait for freaking ever for the game to decide to start over.

Meh. Sluggish controls make me fell like I'm pushing through molasses. It's not fun when you see what you need to do, but have to fight the mechanics to do it. I'm going to give the rest of this game a pass.

I want to love this game as much as the reveiwer does, but the controls are rage-quit-awful. Are we playing the same game??

Once I "kinda" mastered the controls ... I got a little way. But still got lost, and couldn't figure out where to go next.

Very attractive graphically, but yup, the controls are too sensitive when you try and slow down, and too fudgy to maneuver quickly.

Beautifully drawn, but its like playing Mario-on-ice levels. I didn't push a single guard into spikes without following right behind them.

I'm ok with the gradual acceleration, but when you push the button to go the opposite direction it should slow you faster.

Hmm...unlike most people here I didn't find the controls nearly so bad. I was able to beat the game with relative ease and only fell into spikes once, and was only seen twice. It wasn't the most fun, nor was it particularly challenging, but it was a neat idea and I liked it.

I *so* want to love Unity games -- the terrific visuals and the awesomeness of the 3D renderings are really something different.

But until they can figure out how to make Unity play nice with browsers and older hardware, they're still just novelties that are interesting to try, but I just don't want to sit and play them for very long (thus the length of this one was actually a plus -- about the time I was sick of the squishy controls, it was over)

Hopefully the issues that make Unity so clunky will get ironed out soon, and we'll be playing super-cool games in the near future!

Hmmm... I was navigating through the maze when suddenly - maybe I bumped into something? I took flight and landed "outside", on the snow, unharmed. I ran here and there for about half a minute trying to find out if it's part of the normal gameplay or a bug, when - while nothing was apparently happening - a popup informed me that my friends escaped and I was seen for 6 seconds and asked me whether i wanted to play again.

Is the name supposed to be a parody of Metal Gear Solid?

Took longer to read the review than to play the game.

I did like it. I wish there was more than one level and if there was more grip or counter force when pressing the opposite direction that would give you game play options. A possibility of more speed as well would be a nice feature (faster movement). More camera angles and a wider view could be helpful as well for game expansion and if the game were harder.