Bearface Games' Merchant, the new simulation game for Android, is a combination of crafting, RPG, incremental and resource management elements all deftly shuffled together into one neat release. It plays a bit like an incarnation of Recettear's formula for your phone: As a merchant, you hire heroes to go off to slay nifferous creatures and then use the materials gleaned to make items you can either sell or equip for your heroes to improve their mighty-deed-doing, as it's known in the biz. Critters generally yield their own resource types, along with the occasional rare, and these become important when you decide you want to craft specific items. Unlike many games you have five different crafters with their own specialty and plenty hero slots, each of whom can do their thing independently and noticeably level for it. Crafting merchandise not only requires specific resources to produce, but also varying amounts of gold as well. Selling merchandise typically garners about twice the manufacturing cost, which is where the resource management aspect comes in. Do you churn out mass quantities of the same low-level items for steady profiteering, or do you make a few pieces of high-quality equipment for your heroes to enable sojourns into more dangerous territories to enable you to put better and more profitable wares on offer back at the shop? 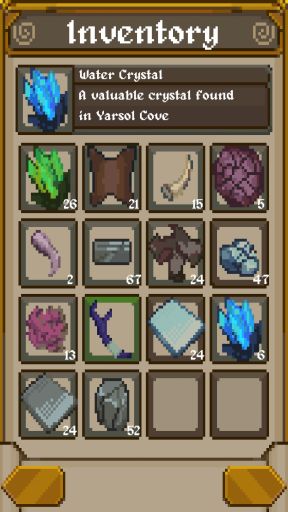 Both crafting and adventuring require varying amounts of time determined by the difficulty level of each, which is where the incremental element comes into play, managing your five crafters and several adventurers. It's also where Merchant has drawn the most criticism; some feel a game that requires playing in sets of one- or two-minute increments to be a little disenfranchising, while others enjoy the sense of realism that comes along with it. After all, manufacturing and adventuring don't happen instantly in real life either. Still, it would be nice if low-level raids took proportionately less time once you've leveled and can presumably handle that entry-level baddie in mere moments, or at least increase the size of your loot hauls from them along with your ability versus theirs. We prefer to interpret this as a temporary game balance issue that will be noticed and sorted out in due time, particularly as a game which features multiple heroes capable of adventuring in different areas simultaneously has hero costs that relegate players to using grinding with just the one initial hero for what seems to be ages. That said, Merchant seems to be doing remarkably for itself already. Resplendent with endearing 256-color graphics reminiscent of VGA graphics from the days of yore, Merchant has already found a small devoted fandom with its own subreddit and even a starter Wiki in the works. Still being very actively developed post-release, give Merchant's unique blend of gameplay elements a try with the comfort of knowing that if you have a suggestion, question or feature request there's a very responsive community all ready for you.

Thanks to Ryan for sending this one in!

Tried it out for a bit, and the timing just takes too long. Quests are measured in one minute per monster level, same with crafting. That's far too long to wait. The game is too slow-paced to play in one sitting, and it takes constant attention to play as an idle game.

Drop the time-per-level to, say, 15 seconds, and it'd work. Allow automatic questing and it would make a decent idle game. Love the concept, if the timing was adjusted, it would be great.

it was nice... then it sucked.. I collected a lot of iron ingots so I can make venom's knife but what happens is now I can't see any recipe -_-.. so I cant blacksmith anything.. blargh

rosedragon, the button to the right of the crafter shows a list of what you can craft, based on the materials you have. By contrast, the button to the left lists all the recipes that crafter knows how to craft. You can bring up a list with the left button, find the recipe, and then see what you need in order to craft the item you want! Enjoy!

No longer able to craft. I've been playing this game for over a week. I have the materials needed to craft, but the craft screen is not showing anything to craft in any category, even after a full device restart, there are no items available for crafting.

i downloaded it and played 7 hours straight... until i hit the level 20 cap :(

then i found all these updates online, awesome game... dont stop updating :)

if you think its slow.. just aim for your second hero asap...

once you get two heros going, and a couple crafters, its non stop real time clicking....

once you get 5 crafters,and 5 heros all busy simultaneously its inasne..... i like the inventory limit, it makes it like a puzzle, you have to prioritize what you want...

i figured they would all use the same type of armor so i could use my high level blacksmith/armourer..

going to start the 1.28 version with level 30 cap....
dude, if you want help, i would gladly volunteer my time to help with this game
hit me up at
[email protected]
i can help with graphics, or naming schemes or whatever...
awesomest game