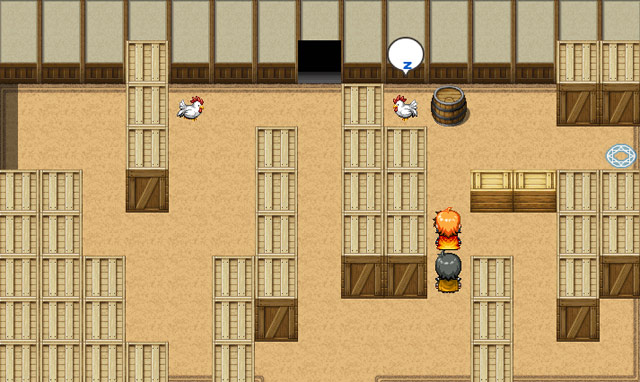 In the first part of this episode, author of the Medieval Cop/Dregg Morriss VasantJ saga left us hanging on all the important questions. Questions such as: how will Amber Heart and her friend Mel Vin ever escape the fowl play at the hands of the chickens? How do you launch a sneak attack if your friend insists on screaming upon entry? What awful puns will they have to endure this time?

Note: Before playing this game, you may wish to check out the previous episodes in Medieval Angel series, as well as Part 1.

Warning: If you haven't played Part 1, this review may contain plot spoilers. Proceed at your own risk!

After a thought-provoking introduction about the Gods, life, and the Universe, the game delves right back into the story. If you don't remember from the first part, the chickens have gained the comradery of a much stronger ally - a bear! And if you're groaning at the thought, I understand: if the chicken puns made you feel all clucked up, twice as many might become too much to bear. Your knowledge of authors, stars, composers, and more will be tested as you engage in a sneaky mission to get past the chickens by brain over brawn.

When you finally make it through the maze of chickens after racking your brain for appropriate distractions, a mysterious glass sphere sits in an otherwise nondescript room. And just as you're trying to figure out the devilish contraption, who might walk in other than the Chicken Emperor's right-hand chicken himself! What does he have in mind for the sphere? To hurt humans in the worst way imaginable. Not by suffocating them. Not by killing them. Oh no, he has something much, much worse in mind for what the diabolical gas contained inside will inflict upon them. Are you intrigued? You'll just have to find out the pandemonium he plans to unleash upon humanity yourself, and try to put a stop to it! By the way, don't forget about that bear either...

I'm not going to say too much more in terms of plot (I might have given away too much already), but Part 2 of this game nicely wraps up this arc of the story - for now, anyway. Like many of VasantJ's more recent titles, it feels a bit on the shorter side, and I wish it had been a bit longer. But I suppose that's also the hallmark of a good adventure. There are also still a decent amount of grammatical errors in the text, though you still get the gist of what is being said. And it is true that "most stupidest way to die" has a rather unique interpretation.

The controls in Medieval Angel - My Uprising, Part 2 are essentially the same as the first part. Use either keyboard or mouse navigation to move through the areas. In some areas, one or the other will be more helpful, i.e. in the timed part. It's also helpful to make sure you have the "Always Dash" option from the settings turned on if you're going to maneuver the chicken base with the keyboard. Click on an option or press enter to confirm it in dialogues and battles. The other settings can be accessed from the menu. See you on the other side...if you bear. I mean dare!