Majesty: The Fantasy Kingdom Sim from HeroCraft is a mobile port of the fantasy strategy game first published in 2000, with a sequel following almost a decade later. Fans of the original will immediately fall in love with the mobile release, and anyone new to the series will find plenty to like about this portable-friendly title! 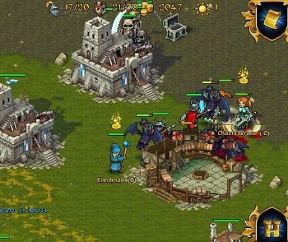 As was the norm at the turn of the century, most PC strategy games took several pages of design from popular releases such as StarCraft and Age of Empires. Majesty does the same, but it introduces a different control mechanism and brings in a fantasy setting to create a very different sort of experience. Your job is to manage resources (including economic and scientific), command troops and workers, and build structures that allow you to grow as a kingdom. Everything is handled quite elegantly with the touch screen, but instead of directly moving units around, you place flags that encourage them to do different tasks. Some units will head out and work all on their own, such as the ranger automatically exploring new terrain, but most need some sort of incentive before they'll leave their huts.

Completing quests is the focus of the game, and there's quite a variety of them to be found, especially when considering this is "just" a mobile game. In addition, there are plenty of unexpected happenings you'll need to deal with, such as trolls robbing caravans or the kingdom's gold transforming into cookies! It's a surprisingly epic game for such a small package, and it made the leap to the mobile world without so much as a stumble.

NOTE: This game was played and reviewed on a Motorola Atrix. Game was available in the North American market at the time of publication, but may not be available in other territories. Please see individual app market pages for purchasing info.