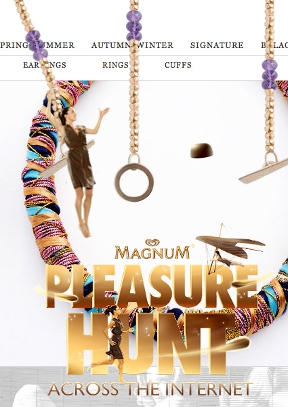 I think it's about time that I admit that I just don't understand viral marketing. For instance, if I decide to use an advergame to sell a certain chocolate-covered ice cream treat that just so happened to share a name with a brand of prophylactic, I probably wouldn't call said game Magnum: Pleasure Hunt. Then again, I wouldn't know why a jump and run platformer based around racing through a myriad selection of websites would be considered an apropos format for an ice cream bar in the first place. But hey, I do know a good time when I see it, and Lowe Brindfors and B-Reel have certainly given Unilever their money's worth when it comes to making a commercial that's hilarious to play.

You'll want to make sure your windows are maximized and your speakers are turned on for this game. Using the [arrow keys] to move, and the [spacebar] to jump, you speed through an overview of the internet, interacting with various hot-spots along the way. All the while, your goal is to collect the bonbons which, my sources assure me, are the taste-tastic secret ingredient of Magnum Temptation ice cream bars. Occasionally, there is a break from the platforming for a brief vehicle section or cut-scene. Make haste, grab the bonbons, and invite your friends to beat your high score on facebook. This last feature is one added purely in the spirit of friendly competition and has nothing to do with further spreading a corporate message. Share and Enjoy, CONSUMER_69101!

Magnum: Pleasure Hunt has both a high concept and high production values, and it pays off. I always find it visually interesting to be in the control of photo-realistic characters, and this game is notable in breaking the fourth-computer screen in ways that I've only seen once before. Incredibly gimmicky? Yup, but like the song goes, you gotta have a gimmick to be a star. Certainly I would want to see more internet locales that I, as an American, would be familiar with, but I can understand that the focus is on the European market. Thus, the majority are Unilever partnership sites or clear pastiches. No matter. The various screens are packed with stylish interactions, a kickin' soundtrack by Plan8, and a lot of cute hot-spot touches.

The game's biggest downfall is in the mechanics, which come off as more than a little stiff. Moving your lady avatar doesn't flow as well as it should and the jumping physics just feel off entirely. What's more, in the screens that let you jump on the textual and pictoral elements to reach bonbons, the platform detection is frankly shoddy. Perhaps part of this stiffness is inherent to translating photo-realism to the platform genre, but I can't help but thing that it will be something that prevents it from becoming a Subservient Chicken level viral marketing classic.

In the end, the fact that it is 75% an effective game makes it 100% an effective ad. If it were in fact possible to purchase the product in the US, I'd be sold as A. I want more people to be paid to make games like this, and B. I like ice cream. I think you'll be quite satisfied with Magnum Pleasure Hunt, just like I'm going to be quite satisfied with the Dilly Bar I'm now going to purchase. Later!

Oh man. I play the whole game, get all hungry for ice cream, and it turns out I can't get it in the states? Oh god why.

At least it was a fun game.

The only possible explanation I can think of for this game is that Magnum has TV ads just like it.

Best advergame concept ever, pretty much. XD Unfortunately, the stiff controls (especially jumping) made it hard to play, and it kept glitching in and out of focus when I was trying to play. :s If only it had a few less bugs, it would be a good game to match the cool concept!

That was a cool, fun tromp through the Internet... yeah, the controls could have been MUCH better, but it was still cool to see such this particular concept.

OMG... when I first clicked on the link in the review to the WarioLand Shakeit video, I was like "Great, Youtube changed the interface AGAIN?" But then... xD aw, that was awesome.

I know, right? And it was absolutely mindblowing in 2008 when the YouTube interface looked exactly like that. I mean, come on... Wario broke the internet!

What fun! And I can get a Magnum, too bad it's raining right now, maybe later?

That ... was different and very very cool.

The controls seemed a bit sticky at times, but it was still a clever and enjoyable game. Apparently effective too, as I just had to look at those Tiger of Sweden dresses afterwards (omg $2000!)

I have to agree completely with Tricky about the frustrating faulty platform detection. Sometimes I would jump straight up and land on a platform. Other times, while in the exact same position, I would fall right through.

i thought it was about condoms too at first..til i read the review heheh. how is it that her skirt seems loose yet manages to stay nicely down even as she's jumping ? :>

overall, nice game. i, too, just had to search for those dresses. nice.

This was surprisingly fun. Magnums are awesome though so it probably helped that I already liked the product I was being tricked into liking. I don't understand the sexy lady advertising they always do though, as if it's 1976 and I have a penchant for misogyny.

For all the North Americans who can't get you're hands on a magnum, you have my sympathies. Worse though is that you don't have TimTams. Best biscuit (cookie) ever! Google them and then dunk some Oreos in a glass of regret. Then move to Australia.

Dandy, actually some specialty food stores in the U.S. do carry Timtams. I've never had a problem getting them when near major cities. TimTams and Tawny Port are a favorite after dinner treat of mine. :-)

I remember Vienetta. Only recently did I learn that they still have it in Europe, its continent of origin.

What the hell. Did JIG get paid to review this? And did everyone here get paid to leave a possitive comment? If so, where do I sign up for the money?

Seriously, what is going on here? Even for an advergame this was crappy. Slow, buggy controls, crappy physics. Need I say more?

Only that that modell likely didn't a magnum or another sweet for a long time. advertisment is so hypocrite.

@Raeden
The controls worked fine for me, and the game was pretty good with speed, I had absolutely no lag. Music was catchy, and it was an interesting concept. Maybe your computer is slow. Or your connection sucks. Whichever.

This wasn't my all-time favorite game of the century but I liked it. It was cute. And with a title like Magnum: Pleasure Hunt how could I resist? Although, I admit I was totally expecting a different game before I read the review. XD

Magnum ice cream is finally available in the US - since April 2011. Enjoy!

Thanks for the heads-up, corporate overseer!

I can assure scandalised North Americans that on this side of the Atlantic we've never heard of Magnum Condoms. And Penguin and Club biscuits are much better than Timtams.

The game is good but I strongly hate ads involving women who are there to seduce men viewers.

I've seen stuff like this before too, but not interactive though.
Bit like the wario land thing (which was quite amusing):
http://producten.hema.nl/

It's an advertsiement a couple of years ago when a big Dutch warehouse launched it's online shop.

I think that one's still one of the best I ever saw :)

Oh my goodness I just ate the white chocolate Magnum bar. It was heaven.
And I also enjoyed the game yada yada.

Magnums are indeed available in the states. :D

Cute! But NO coupons! Would have likes to have been able to back to the previous screen in order to pick up bon-bons that I missed, though. Quick paced and a fun! Still needed coupons.

[Just close the browser window and that will end the game. I've just re-tested the game and there is nothing suspicious about it. It's a reputable site. The game takes you through a series of sites that only look like popular sites like YouTube, etc, but it's all part of the game. -Jay]