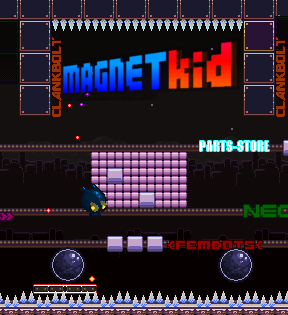 Since the dawn of modern science one question has continued to elude mankind's search for answers: magnets... how do they work? It's a good thing we've got Magnet Kid, a puzzle platformer by Strange Studios to help us muddle through the magnetic mystery. As the titular polarity-switching robot, it's your job to search for some arms, avoid spikes and maybe learn a little about magnets on the way. Like certain other games about robots, however, Magnet Kid won't reveal its secrets without inflicting a little pain.

Run around with the [arrow] keys, press [A] to jump and press [S] to switch between red and blue polarities. Magnet Kid is attracted to objects of the opposite polarity and repelled by objects of the same polarity. These concepts are used in a variety of ways; for example, deadly lasers aren't so deadly if you're the same polarity as they are, while you can hitch a ride on a moving platform by changing to the opposite polarity and sticking to it. Your goal is typically to reach the exit portal at the end of each level, though sometimes you'll need to drag a key along with you by sticking it to yourself.

Make no mistake: Magnet Kid is tough. Neither polarity will save you from the killer spikes and mines strewn about the levels. Even these hazards can become the least of your worries as the game bombards you with polarity-switching madness. One early puzzle involves coordinating polarity swaps to perform high jumps over obstacles while ensuring you don't jump too high into the spiked ceiling, and that's really one of the easier levels in the big picture. There's infinite lives, thankfully. You'll be using quite a few.

All of this is tied together by a hyperactive presentation reminiscent of an Adult Swim game. Those brave souls who face the toughest gaming's got to offer and smile defiantly will love Magnet Kid; while it's not quite as tough as some other frustration platformers it's still got some bite. Besides, everyone knows that magnets are miracles. We may not understand how magnets work, but a miracle just might keep Magnet Kid alive.

Lots of fun and lovely to look at, but got to a level that crawled at a snails pace and would have been too hard to coax my little magnet kid to the finish.

Tiny frame, CPU hog, difficult to make out details. Walked away after a few levels.