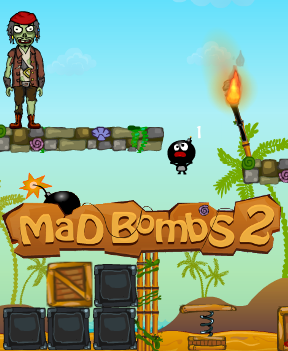 The bad news is, the zombie apocalypse has returned. The good news is, so have the strangely charming, incoherently jabbering, self-sacrificing heroes who saved mankind the first time around. The team at DreamGate Company brings us the sequel to their original entertaining and ruthlessly addictive action puzzle platformer with Mad Bombs 2, and it's chock full of as much zombie-exploding goodness as its predecessor.

The controls are very straight-forward. Light the bomb's fuse using a torch or hanging lantern, then help him scurry and babble his way across the stage using the arrow keys to run and [spacebar] to jump. You have only seconds before everything goes ker-blammo, indicated by the number above the panicking bomb's head, so you'll have to be fast to ensure the little fella's sacrifice isn't in vain. Position the ticking bomb near a zombie to destroy him directly, or use the environment to your advantage by setting off chain reactions of TNT, or even launch cannon balls to do the dirty work for you. You have a limited number of bombs per level, indicated at the top left corner, and, for some of the later levels, you'll need them all.

The controls do sometimes feel a bit unresponsive and as if they're working against you at times, especially when you accidentally miss a jump or push a box just a tad too far to complete a level, making the game slightly less casual and a bit more keyboard smashable. The puzzles are smartly done, however, and become increasingly complex as you play due to the addition of deadly pitfalls, spikes, fiery rain, and physics elements like springboards. This prevents any of the 30 levels from ever feeling repetitive and ensures you'll have to pause and use your braaaaaainnns (I'm sorry) to clear the undead from some of the later trickier stages. The payoff is well worth it, though. Successfully completing a level is incredibly satisfying, especially when you finally get to watch those smug undead jerks shatter into a million pieces. They'll never get the deposit back from whatever pro-zombie costumes shop they rented those outfits from now!

Ok, the drawings are funny but the gameplay seems to have some delay...jumps doesn't react immediately and I find myself exploding before I can reach the target.

Am I the only one having this issue?

Nope, I'm experiencing them too, making this game frustrating and totally unplayable.

I didn't have the same issue. What OS and browser version are you using? Is your Flash Player updated?

Ah. there's a trick to level 3. You can't possibly complete the level in the obvious way, there just isn't enough time, but it's not because of any lag.

Think of the game as part tricky puzzle and it should make the game much more fun. :)

I beat lvl 3, but there are level where I would like there to be proper control, not lagged.

Same thing with Google Chrome, controls are not very accurates. Never mind...but thanks for your help and feedback Jay.
Mike

Level 20 confused me for a bit, also! So much that I thought the game was actually broken.

Getting by the spikes is all about timing. The first set is actually a group of four on two alternating timers. Wait for the first to go down, walk up to the second, wait for it to go down and quickly walk up to the third, etc. Drop down to the next level while the next set of spikes is still up and you should land safely plus have enough time to run left to the boxes. Careful not to push them too far, as you'll have to restart the level if they get completely pushed under the platform. Use the boxes as a step to jump up and get to the wooden spike. This is where the sign's meaning becomes clear - if you simply let the spike hit the zombie, nothing happens. Instead, you have to jump on top of the spike before pushing it over, and ride it to the other side. There are teeny tiny spikes on the other side of the undead, use them to complete the level.