Originally released as a WiiWare download back in 2008, LostWinds has finally wafted its way to the iOS device world, bringing with it the same shining visuals, imaginative gameplay, and creative use of physics, all told through the wide eyes of a young boy. LostWinds combines traditional platforming elements with a touch of wind manipulation, giving you control over more than just the main character as you explore the lush world before you! 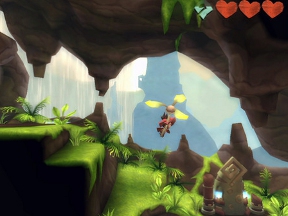 Toku is napping happily in the green grass, but a gust of wind brought about by your swiping finger promptly wakes him up. Once you're about, tap anywhere on the screen to send Toku hobbling in that direction, automatically climbing up small ledges in the process. Tap and hold to turn on auto-walk, a useful feature for covering large distances while keeping your hands relatively unencumbered.

Having your touchy fingers free is important in LostWinds, as you'll have your hands full managing things with your wind powers. Swiping the screen pushes a bit of air in that direction and speed, and you can use it to affect the world in both useful and cosmetic ways. Brush trees and bushes to discover animals and other surprises, use the wind to surprise people just for fun, and send a gust of air to shove Toku in the direction you need him to travel. You even use tornadoes to travel and the wind to fight battles! The world of LostWinds is rich with areas to explore, and you'll need to pull a fair number of tricks to get to where you need to go. 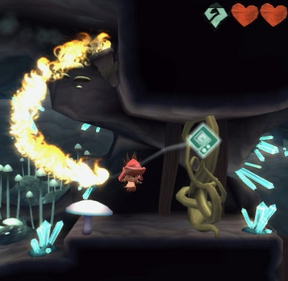 Analysis: It's always great to see a game as honestly entertaining and creative as LostWinds seek new life on a different gaming platform. The original Wii release was lauded by everyone who played it, and making a debut on the iTunes App Store should garner just as much affection for the title. The transition is a bit rocky at times, but otherwise the game survived the port fully intact!

One of the key aspects that makes LostWinds so fun is the variety of ways the game encourages you to explore. Wandering around to find nooks and crannies to stick your head in is one thing, but using the wind to push different things around almost always yields a surprise or two. The clever ideas never really stop, and for that alone, you'll keep playing the game to the end.

The biggest challenge in LostWinds is acclimating to the controls. Playing the Wii version was phenomenal, as the physical controller allowed for precise movement while the motion controls let you swipe away as the wind. On iPhone and iPad, though, your inputs are extremely limited, and the result is a movement scheme that is quite frustrating at times. Making jumps while using the wind can be extremely challenging, and only with practice can you actually pull it off.

With any luck, future updates will alleviate the control scheme woes, as it would be a pity if a game this imaginative fell to obscurity because of an awkward interface. Even with the current set-up, LostWinds is entirely worth your time, especially if you didn't play the game on its original platform. A beautiful fantasy world to explore and loads of creative uses for the wind powers, this little game is a winner no matter what system it's on.