TAKE UP THINE MOUSE, NOBLE WARRIOR, AND MAKE READY THY WEAPON IN... uh... the service of ultimate evil? Wait, what did I just sign on for? The dungeon-crawling action RPG Loot Heroes, from Vitaly Zaborov, Kirill Kashur, and Edgar Plotnieks, stars you as some helpless berk stranded in the netherworld and conscripted to take down a whole pack of big, mean demons... for a demon who wants to be the biggest and meanest. Golly, what could go wrong? Just click to play, using the mouse to direct your character around the dungeon, and attack whatever's closest. You can choose specific targets by clicking them, but, uh, honestly, you'll typically be so swamped with enemies you might as well just swing at whatever gets in your way. Loot is randomly created and dropped, allowing you to find rare and powerful items you can equip or recycle into gold to allow you to buy more items. As you render enemies into unmoving puddles of gore, you'll also level up, gaining points to distribute to your statistics. Take out each area's big bad demon to move on to the next, and if you die, it's game over... though everything you do works towards unlocking new characters with different abilities! 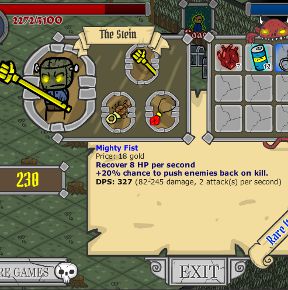 This is one of those games that's definitely fun in an infinitely casual and simply addictive sort of way, but also carries a few buts. Its simplified Diablo-esque gameplay is great for a few minutes of hack-and-slash gimme-dat-sweet-loot action whenever you want it, but the interface and limited control options leave a lot to be desired. The unlockable heroes and veritable plethora of powerful items to find makes for great compulsive action, but it's also undeniably more than a little repetitive and it can feel like difficulty comes down to a simple case of swarming you with a tidal wave of foes rather than any actual strategy. Loot Heroes is also, like... weirdly bloody for a game that's so otherwise cute. Where are in the world are the skeletons keeping it? Are you killing skeletons who are carrying donations for the blood bank? You monster. I'm not opposed to gore, mind, it's just something that limits its audience in an odd way when it didn't need to. All that being said, however, Loot Heroes is still a fun, chaotic little imp of a game in the vein of Hack Slash Crawl, and one whose rough edges I hope we see sanded off for a sequel at a later date.

It's not working for me. I get to the character-selection screen, and it will let me pick any of the starting characters, but it doesn't progress past this point. The only things I can do is select another character or go back to the main menu.

My character moves in the opposite direction of where I'm clicking, is there a way to fix that? It's severely hampering my gameplay when I walk straight into enemy attacks.

I dunno what the problem is for others, my controls are fine. You just need to be clever with your weapons selection. I believe the game auto-pauses while you switch items.

This game is fun. The corpses of my enemies!

I thin there is a bug for hugh blade/draco pike/draco wing, A10 ring, A10 amulet, as the weapon can not respond to the ring and amulet, and in the desrcipt it said it need Unholy ring and A10 stone...

Beside I think the Orc is the best, cause you can Hit and run with 100 SP, with the fast HP regenation while away from enemies' attack...

@bearharry Those are the Epic Item combos. The description appears on the weapons, you need the whole set equipped to get the bonus effect. I don't recall that Unholy Ring is in the same set as A10 Stone. They'll work, but you just won't get the Epic bonus.

@Shudog I know they are epic item combos. But According to the description of A10 ring and A10 amulet, the A10 combos should contains " hugh blade/draco pike/draco wing, A10 ring and A10 amulet". And Unholy Ring (according to the decription of it and other items in the combo) should be include in the " Doom Blade/ Executioner/ Burning Bow, Unholy Ring and Doom stone armor set". I doesn't get any draco wing so I don't know is the draco wing bugger. But I sure that both method (using blade+ A10 ring +A10 amulet and using Blade + Unholy ring + doom stone)can't make hugh blade to have it " cast large fire field instead of curse" active. Same for draco pike...

Is there ever an end? I went through the game twice and all I got was

the devil offering me a challenge to try it on a harder level. I beat the first round, beat nightmare, and am on hell mode where it's really getting hard. Is that the final end game or does the game keep kicking up the difficultly?