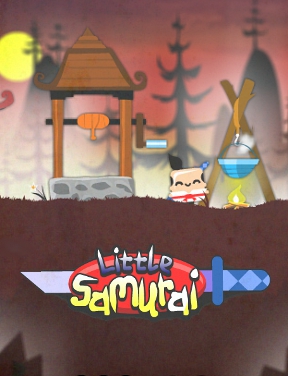 "Abbiba dawa gawa!" Thus speaketh the hero of Little Samurai as he proceeds from one location to the next. Is he proclaiming his plans for world domination? Does he want fries with that? Or, just perhaps, he is thanking you for your help in defeating the evil Emperor Kuroi in this amazingly cute little point-and-click adventure by Robin "Pencilkids" Vencel.

Find clickable areas in each scene with the changing cursor and if you click them in the right order you will have cleared the way for the littlest samurai to move forward. After clicking around in the scene click on the little dickens and he will either thank you with his unique language and waddle to the next screen or pout and refuse to move if you've not managed to arrange things just so. Picky little guy, isn't he? At any rate, he needs the help to travel to the stronghold of the evil Emperor who has kidnapped the mighty red dragon and plans to use the dragon against all the land, so picky or not the little samurai needs all the help he can get.

Little Samurai features some of the best graphics ever from Robin Vencel. It is a combination of the standard Pencilkids cartooniness crossed with some soft-focus Japanese-style scenery that is alternately amusing and breathtaking. A haunting oriental tune and amusing (for the most part) sound effects round out the experience, although the little samurai's gibberish can get a little wearing after a while. In fact, he sounds rather like a long-lost cousin to Abuba the Alien although much less understandable. Fortunately that's what the mute button is for.

What we're looking at here is a pretty short but completely kawaii little point-and-click adventure that shouldn't take more than five or ten minutes out of your busy day. The gameplay, while smooth, is on the easy side and the challenge is more about using the least amount of clicks in each scene than in any type of heavy duty puzzle solving. The itty-bitty hero himself is alternately excruciatingly cute and pretty darn fierce when combat arises. For anyone who enjoys Pencilkids games or point-and-click adventures Little Samurai is well worth the time, especially for the kicking animations at the end as our intrepid hero and the evil Emperor get their kung-fu on in a fight that spans several scenes. So travel back to an ancient Japan that exists only in fantasies and daydreams and help wipe out evil from the land. And maybe bring some fries, just in case.

Graphics are nice, but somehow the puzzles manage to combine being way too easy with not making any sense!

I vaguely suspect that our samurai protagonist is actually a baby.

How do you get the 457 on the book in the doctors room, the one you get by looking into the telescope? close as I can get 456.

Mute Button? No way! The game is too cute and too good for the mute button! :)

Pencilkids are always a little too easy (they're meant for kids...) but they're so darned cute, and sometimes your ego NEEDS a P&C that's easy.

@Soniclover: It doesn't matter if he's a baby or not, he's still DANG good with a sword.

2 favorite LOL's in this game:

1.setting the one guard on fire
2.when the dragon sets the villian on fire, all he does is cry like a baby.:) Oh wait, he IS a baby. :D (Maybe.)

So yeah, as usual, I lol'd a few times, and got Elite in just 2 games, so it was easy, and obviously, I was NOT dissapointed.:) Another great game! Now all we need is an Anbot 3...

SO cute. And yet, SO short!

I only just saw this game! Must've missed it when it was first posted... but I loved it! I especially liked how the samurai would give out little heart-shaped stuff and stuff when the path was cleared :D

And I was feeling bad for the horse/pony... until they rewarded it with a whole cartful of carrots! I thought that was awesome :)