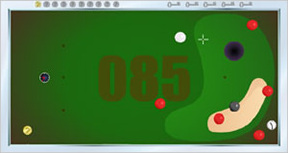 From Lightning Games and Playaholics, the Flash-based Lightning Pool brings all the accoutrements of modern electronic entertainment to the classic game of billiards. Race against the clock as you collect power-ups and coins, unlock secret levels, avoid obstacles and, of course, clear the table with style and finesse in this addictive take on pool.

Each level begins with six red balls and one black ball. You can save the black ball for last to get a bonus but, unlike in eight ball, sinking it earlier will not result in a loss. Aim the cue stick with the mouse and hold the left button to determine how hard to strike the ball. The color of the crosshairs will fade between yellow, representing the most force, and red, representing the least. It's impossible to ignore the huge numbers steadily counting down to zero in the center of the table, but relax and concentrate before each shot; sinking the cue ball will cost you 4 seconds, and some of the hazards often littered on the table can do even worse. Thankfully, you won't be forced to replay previous levels, unless you want to attempt a better score, as Lightning Pool saves your progress and even the number of times you've attempted each table.

Analysis: Beginning with fairly conventional power-ups and items such as stopwatches and coins, and culminating with pockets that snap shut and a table set above a vast abyss, Lightning Pool stays fresh and fun by providing new challenges with every level, although after number 15 they begin to repeat. For those looking for a truly high score there are even several secret levels, unlocked by collecting 10 of the coins randomly found on the table. In the end, though, Lightning Pool is still pool, and if knocking a bunch of balls around with a long stick isn't your idea of a good game, all the quirky levels and collectible items in the world probably won't make it any more fun. However, billiards fans will find a lot to like here, and a serious challenge to boot.

I remember this game. It really sucked me in for a while. I played it in my spare time at photography class (someone in the class discovered it, kinda) and next thing you know it just didn't stop.

After a while the levels just repeat themselves but with shorter time limits.

The last level I beat is the golf level, but instead of the normal amount of time to beat the level, by then I was expected to beat it in a minute.

Not a bad game but a rip off of Blast Billiards - which IMHO is a much better game and comes in about 4 different separate games.

For some reason when ever I play this I think,
Billards meets pinball
but a good game

it's fun! im kinda bad at it tho, takes me 2 or more tries to get past each lvl...what do i do on the one where everytime u pot a hole, it gets blocked? theres too many balls for 6 holes.

very addictive and fun... went up to level 43 then decided to get back to work... does anyone know if there is a "last level"?

I like the game, but the physics of the balls is kinda strange - they start off way too fast and stop much too soon. Other than that, a good concept.

Hey Jay, I just wanted to tell you that I'm taking the class "Interactive Digital Media" at RIT and our teacher, professor Goodman, just mentioned your site as a great resource for our next project, which is to design and create a Flash game. I've been browsing this site to cure boredom for months and I just wanted to say thanks, as one of the games on this site inspired my choice for the project (I'm going to try to remake "Bubbles" with a little more action). So uh, thanks for all the links!

well i dont think its that good of a game

does anyone know what the different secret levels are? ive only seen the first one...

I like the game, though I seriously doubt this is the original site.

This looks and feels to me, like a ripoff site, that decompiles the game, and adds thier own scoring mechanism. More so by all the games on it that I have seen on this site, that wheren't on this page.

Lightning pool seems to be mentioned in kind of many gaming blogs right now. Nice.
We designed it with and for 3rdsense (Playaholics and lightning games).
If you want to waste more time check out our newest game (went live yesterday):
www.hotlapchallenge.com/
Have fun! The voice commentary is a neat feature
Ulrich

anyone got any advice for the "beat the keeper" level?