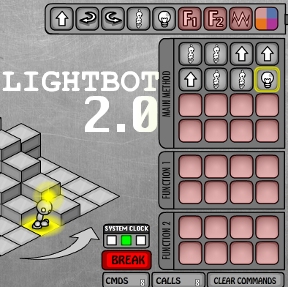 No time for love, Doctor Jones! We've got puzzles to solve! Light-Bot 2.0 is here to test your programming mettle. Using the icons in the top-right of the screen, program your little bot friend to move about his isometric environment and carry out tasks. Although it starts out simple, there's more to Light-Bot's seemingly straight-forward command set than meets the eye, and you'll have to engage your brain to proceed. Make Light-Bot jump? Can do! Make Light-Bot walk in a straight line? Got it! Make Light-Bot perform a series of actions using conditional statements?... wait, w-what?

If you were around in 2008 and not busy fighting off dinosaurs or the Inquisition, you may have played the original Light-Bot, which was fun, but short, and lacked any level editing capabilities. Enter the evolved form, which not only feels sleeker, but also allows you to create your own levels to stump your friends, or see what the community has to offer. While the game itself can be difficult at times, what's trickier if figuring out how to use Light-Bot as efficiently as possible. No, it's not what you might call "pulse-pounding", a "thrill-ride", or any other overused summer movie tagline phrases, but it's a satisfying little workout for your brain. And it's cute too!

To let you in on a little secret, every time you post a comment on an article, the reviewer who wrote it gets an e-mail notification with the contents of what you said. I was a bit hesitant to post another logic puzzle, because it would mean my e-mail would become flooded with further proof that you guys are way smarter than I will ever be. Ultimately, however, I realised I'd have to come to terms with it sooner or later. So go on. Get solving. Make me feel insignificant. I won't hold it against you. Much.

Yay! I loved the first one, and I'm loving this one! I would have liked a few more levels, but I guess we'll have to hope for some creative people from the community to design some neat puzzles with the editor.

One thing about Light-Bot 2.0 that leaves me grumpy: when you're entering a command to turn the robot to the right, the corresponding icon's arrowhead points TO THE LEFT. Similarly, the turn-left command has the arrowhead pointing to the right. This is incredibly annoying. Considering that the original Light-Bot did not contain this "innovation", I'm not sure why the developer did this. I can't be alone in finding this change irritating.

I cannot get "Conditionals #2" to work.

I write F1 to include a "break on yellow", but the robot merrily ignores it--the instruction box never gets highlighted to indicate that it executes.

The key is that

you have to use your light when standing on a colored tile to color the lightbot, and only *then* will it perform a conditional command.

This was not obvious from the "Conditional #1" level, because using the light was just part of the recursive routine.

OtherBill... it's obvious if you get stuck on that level because you made pick-up a blue-conditional, and you're sitting there going, "Why won't he turn on purple? I'm on purple!!!"

That said, I *love* this game. It's just like the mini-game from Dr. Brain that I loved so much, and who knows, maybe that's why I'm a programmer today.

I think I just accidentally wrote a feedback on Armor Games that was longer than the post here! xD

well thanks for sucking up several hours of my life mr. niato. job well done.

Guys! Guys! I just found the question mark icon in the lower-leftish, and it describes everything! Man, I didn't have to play through the first 2.2 sections to find out what all the icons meant after all!

"Walkthrough" (or one possible set of solutions) for Expert Levels 1-3:

(Note: Using CW and CCW for clockwise and counter-clockwise instead of left and right)

I only used one of my functions here. The trick, in my mind, was to figure out what sequence of jumps/walks/turns is most re-usable. Do you need a turn at all? And be very careful not to jump too many times!

I separate this level into two parts in my head: the parts that involve the squares of blue panels, and the part that involves the zig-zag line at the end. I carefully structured a short but useful first function to be used in both parts. This maybe wasn't the best way, but my main function deals with the first part manually and calls F1 several times, then calls F2 which deals with the second part (by also calling F1).

Walk, F1, CW, Walk
F1, CCW, F2
(since it only happens twice, you could just call it twice instead)

Have to do this with just a function call, huh? For me, that ended up being equivalent to using just one function, and the other function calling it. ie, F2 didn't include any looping or recursion. But hey, it worked for me.

Writing a function that could be used for both walking along the path in the middle, and jumping around the outer edges. Judicious use of the if-orange clause and the fact that the little guy won't walk off of edges lets you do both at once, even if you have to call it several times to manage it.

JIGuest: it might help to think of the "arrows" as clockwise and counter-clockwise, rather than right and left.

Programming games always leave me cold. I know quite well how to program, but I'm not interested in terrible programming environments.

Love the game. I'm currently stuck at the end of conditionals. In my frustration and attempt at the level editor, I've created three levels. (Sorry, I can't post the links - when I can I will). I created: one hand clock, and A Knight's Journey (& #2). I must say it was more challenging than I anticipated creating them. I really like the 'knight' move based puzzle. Maybe for a third, I'll incorporate teleports.

K. Finally! I got the links (actually resubmitted). So here are my levels:

#3 is by far the easiest to solve, but it was one of the more involved levels - needing a bit more time to setup.

#2 is probably the hardest, though I'm not sure (it may be easier than #1)

#1, if not the hardest, is at least the most frustrating.

OWO is in a separate theme.

I would appreciate some feedback and what I can improve on.

General Note: There is a transcription error in my first solution (Expert level #1) - needs a jump instead of a light. I am still working on levels 4-6.

The first one wasn't frustrating, in my opinion, but maybe that's because I've seen a lot of puzzles based on knight's moves. It doesn't seem like you're forced to pick them up in any particular order, which might make it easier. It's just a matter of orienting yourself properly and picking the right function to do the move you need.

I was a little confused how the second one was possible at first, since the only way to light-up is to call a function, and both functions repeated endlessly. I was thinking there must be invisible colour-conditions on one of the commands in either of the functions... then I saw the blank spot. Haven't solved it yet (or tried the others) and my lunch break is over, but maybe later...

Since Parmeisan has posted "walkthrough" of expert levels 1-3, Let me post my implementation of expert level 4-6. They are all very calls-efficient and relatively clean. Try to read only the function 1 & 2 parts and deduce the content of the main methods. This shouldn't be hard after one completed all other levels.

Notice: this implementation ignores the colors.

This time the function 2 is a little bit tricky.

The interleaving order between color'd and non-color'd commands plays a significant role in the middle field.

If one understand what my function 1 and function 2 are doing, the writing of the main method should be very easy, mostly a bunch of f1. But if you are lazy, here you are:

In case anyone is looking for another medium-difficulty puzzle:
Orange Square

Only 1 colour of squares, and no restrictions except the limited use of the Main Method.