Remember Taylor? The science student turned stranded survivor in Lifeline? Well assuming you played that choose your own adventure game til you found the best possible ending and didn't leave Taylor to die a horrible death in the hands of aliens, the most pop-culture literate character I've ever encountered is back in 3 Minute Game's sequel to the original interactive story, Lifeline: Silent Night, written by Dave Justus, for your mobile device. Taylor's been rescued by a mining ship but after a few uneventful weeks, the crew is awakened by an alarm indicating an unidentified craft is heading their way. Remembering how much you helped during the last crisis, the astronaut decides to contact you for advice again. Are the newcomers friendly or agressive? Will your choices help or hurt your friend? 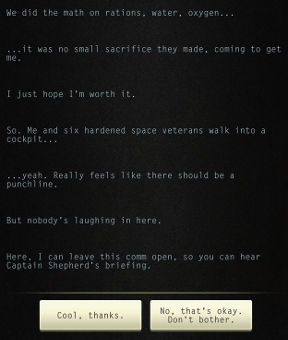 Each decision you make affects the outcome as the story plays out in real time which leaves you hanging sometimes as Taylor traverses the ship or takes a nap. This adds to the atmosphere of the game as you feel like you are really interacting with a person as opposed to just reading a story. To me the story wasn't quite as compelling as the first installment (though the writing is still great), perhaps because Taylor is with a crew now, so I didn't feel quite as crucial to the student's survival this time around. It also felt a bit shorter. However if you played the first game, you probably formed some sort of attachment with the character and it's nice to have a follow-up on the story line. After you've played one story path, you have the option to turn on fast mode, which lets you skip long wait times, and also unlocks the ability to skip back to previous selection you made and change your choice which allows you to explore all the content at the speed you desire. So check out this exciting sci-fi adventure, and be comforted by the fact that if you do let Taylor down, you can always rethink your decision.

8,052 Views
10 Comments
chrpa— Jayisgames needs your help to continue providing quality content. Click for details The beautiful warderobe bought cheaply at the local market had one flaw - the seller didn't have the key. But then a miracle happened - after river fishing,...  ...

Views
0 Comments
jayisgames.com— Like most people, I love Metroidvania games. They are challenging, satisfying, and in the case of Ender Lilies: Quietus of the Knights, soothing in an unorthodox way. You can run, dodge, jump (and eventually double jump), and use your...  ...