Suppose you're bored, flipping through your phone, when you're contacted by someone who thinks she's reached her brother. But this is more than just a misdialed text message. She says she's contacted you magically. That there's a whole underground society of magic users in the world, practicing their craft in secret. That some of the more untrustworthy sorts of mages killed her parents when she was a kid, and inexperienced as she was at the time, she accidentally sent her brother to another dimension while trying to keep him safe. Now Arika's out for revenge, and though she's searched for ten years, she still holds out hope of getting her brother back. And she could use a friend and confidant as she tries to collect magical artifacts she needs, if you're willing. Maybe she's crazy, maybe she's not. Either way, get ready to make some tough choices in Lifeline 2, an engaging fantasy text adventure by 3 Minute Games for Apple Watch and iOS. 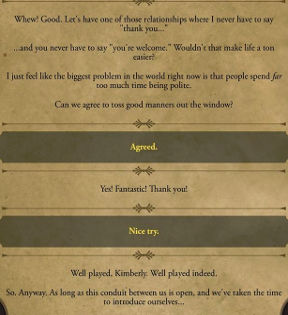 While you're reading the story, every so often you'll have a choice as to how to respond. And it's these choices that determine the outcome of each situation as it arises. As in the first Lifeline game, the story proceeds in real time throughout your day, and as before you can choose to get notifications when she's waiting for you. If Arika needs a nap, you're not going to hear from her for an hour. If she's in the midst of exploring a creepy monastery, she may want you there every step of the way. This again conjures the illusion that you are actually interacting with a person, rather than just reading a story. Dave Justus keeps up his stellar storytelling throughout the different quests Arika undertakes. She is a likeable character who enjoys peppering pop culture references into the conversation as she confides in you, which is a nice reminder that the story is taking place here in our world, and not in a fantasy realm somewhere. Soon you'll be invested and may have a hard time waiting to see what is going to happen next. After you've played through once, you have the option of starting completely over, or perhaps from a checkpoint (depending on circumstances) with the added ability to skip back to choices you've made to change your selection. And though the game doesn't recommend it, you can also turn on fast mode, which disables the real time feature. The fantastical story is long, with multiple paths to travel and different endings depending on the choices you make, plus it has a nice original soundtrack. If you don't believe in magic, this just may convince you to start.

"Suppose you're board"
really?

I'm sure you can understand that simple typos and brain farts happen to everyone. :) Thank you for pointing it out. It has since been fixed.

Is anyone else stuck tying to get through the "slype"? No matter what way I go it's not right. There's always a monk. HELP!

@McPhee: If you keep playing for a while, Arika will give you a hint. If this doesn't help you, then

exactly repeat a path you have already taken, i.e. if you've already done right, right, right, do it again on your next time loop, and this will lead you to the end of the slype.

Had the ribbon. Had the key. Was working on getting the lantern but

I lost my dagger in a gambling match. I had the option to try to steal the lantern, but I declined.

While Arika is sleeping, I cannot help but wonder: did I just completely screw up? Would the game have me wait a long time with no plausible positive ending?

I think it would have you wait with no plausible positive ending(though I don't known for sure as I haven't exhausted all possible endings), but the great thing is if you end up with some sort of negative ending, you can jump back and retry without having to go through the whole story again unless you want to.

I will not spoil anything, since I don't know who (or how many) are playing, but I would *love* to discuss this portion of the game with someone who finished.

I just killed her while trying to get the key. And then it asked me if I wanted to start over again from the beginning or from a quest, so I'm doing the lamp one again. That one was first for me. So you may have time to redo the quest, but the sleeping may only last a few hours. She will wake up.

Arika said she needs some rest. But her resting is not getting over. It has been almost a day now