And speaking of vicious cycles, I finally set aside a couple of hours Sunday evening to install World of Warcraft (cheers, Kim!) and create my first ever character in the venerable mother-of-all MMORPGs. Three hours later I found myself still locked in a seemingly never ending cycle of update installations that required restarting the WoW application, re-accepting the terms of service, and downloading the next update. Rinse. Repeat. I was getting so good at the whole installation process that, when it was finally over, I put WoW away for the evening and proceeded to install Half-Life 2 (cheers, David!). Well, at least the games will be ready for me next time I am ready for them. =)

Thank heavens for casual Web games. They are truly a godsend for anyone with even a remote propensity towards immediate gratification: Click the link + load the game + play = instant fun. No waiting, no installation, just good times. That is what games were meant to be like. Kind of like TiVo for television. Once you experience it, there's no turning back. =)

So, back to what I was saying about what could possibly follow a class act like a Samorost game: How about 30 games?? 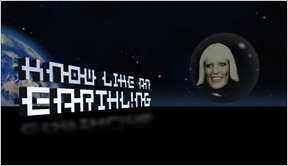 Direct from Mars—not the planet but the candy bar company—comes this wacky collection of games on an equally wacky website called: Life on Mars.

Disguised as a Martian gameshow: Know Like an Earthling—not to be confused with the Venusian gameshow: Walk Like an Egyptian—the Mars site offers Australian's a chance to win fabulous prizes by becoming a membership (sic) to enter candy wrapper codes and, of course, play silly games. You don't have to live in Australia for the latter.

There are three (3) games each from 10 different countries to test your Earth skills. Each game gives you 30 seconds to score as many points as you can. The games are often hilarious, as is most of the site for that matter, and yet none of them will keep you occupied for very long. Still, with 30 games to offer, the sheer variety can be a fun and amusing way to spend an afternoon.

That's about it for a review from me, you're on your own with this one. Post what games you liked or disliked in the comments along with your high scores. I liked the idea for Frash Photoglaphy from Japan's games, though it could have been done better by awarding higher scores for nicely framed photos. My best score for that one was 8000. Crazy silly fun. Click.

Cheers to Chaz for the link. =)

Update: This from the "Life on Mars" website... 'Thank you for visiting Life on MARS®. Life on MARS® is now closed, we hope you have enjoyed it.'

I liked "Find the Gaps." Silly but fun!

World of Warcraft is evil! In 5 months I logged 20 days of gameplay, and I was considered a casual player. I finally quit because my mouse wrist seriously started giving me problems. Um... it was lots of fun though. Interestingly enough I weaned myself off of WOW with Half Life 2. Lately I've been trying to play games that aren't addictive for more than a half hour or so, which is why I've been spending lots of time on this site (which was working out well for me until I found ISketch). Anyways, have fun with WOW, hope you have a glare filter to prevent eyestrain.

The ones I particularly liked was the Fish cook-out (scored 10250 points on that one :D) and the washing in the Ghanges. Kept me entertained for a few minutes. But all in all, good casual fun and quite strange I might add. Too bad there weren't any games for Canada ^_~ They could have had something about hockey or digging your car out of the snow.

I found it actually quite fun to strive for as many minus points as possible. Funniest game was the Bollywood Boom. But my absolute favourite is the gumboot throwing since we actually have that sport in Finland. Well, the point is not to throw anyone or anything with the boot, but to throw Nokia gumboot as far as possible. Yes, that's right - Nokia is Finnish company that started by manufacturing gumboots and tyres. And I think that the Finnish gumboot throwing contests can even end up by people throwing their Nokia cell phones as well.

That was very enjoyable, and highly remeniscent of Wario Ware. I would have enjoyed it if the scores had carried over, as it would have given you a greater incentive to carry on and to play through them all in order to get a higher total.

This was so much fun that I couldn't stop laughing long enough to really score well on anything. Definitely lots of replay in this!
As for Canadian games, Curling would have been just right for this group!

I live in Seattle (lots of Finns here) and we always have a cellphone-throwing contest at our Midsummer picnic. We let people use any kind of cellphone, it doesn't have to be a Nokia.

They took it down! Boo. I thought these were some really great quick games.