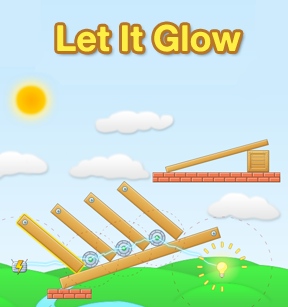 It might be a well-worn concept, the stalwart physics game, but something about Vyacheslav Stepanov's latest puzzle game Let It Glow really shines.

If you have played a physics puzzle game before, this should be like digging into a plate of french fries (or chips!): using your mouse you remove blocks from the scene, the aim being to position one of more conductors to let a stream of electricity jump from the power source to the light bulb. It's the type of game you'll know if you recently enjoyed Wake The Royalty or Ice Cube Bear, but with its own novel twist. Instead of knocking something off the screen, you have to reach a perfect equilibrium for at least as long as it takes to form a halo around the lightbulb.

Most conductors are round and will roll, but you get more positionally-stoic square ones. The range of a conductor can differ from puzzle to puzzle, indicated by a feint circle around the conductor. These circles are also around the power supply and lightbulb - as long as the circles touch or overlap, the power will transfer. Adding some variety to the challenge, some pieces are attached to hinged and other ones, made of steel, can't be removed. 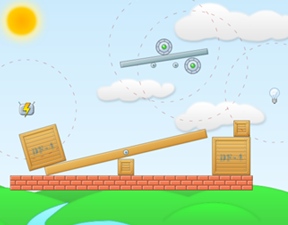 Analysis: It is interesting that when you browse through the offerings in the physics genre, they are like a crate of potatoes: seemingly the same, but at closer inspection they vary in size and shape. They all can be used for one thing (french fries) but you have to be more selective with other dishes, like a stew or mash. And they are invariably bland on their own, but with the right ingredients become something quite memorable.

Lots of physics games fall apart because of shoddy engines: bad inertia and unpredictable movement (the ever-present click-and-hold-thumbs gameplay mechanic). That's like using the wrong potato for your dish. Then there is the failure in choosing the wrong ingredients: poor level design. Usually levels are too samey or unpredictable in their difficulty. In the worst-case, you need luck to really get anywhere. To create the perfect starch-enriched physics dish, it is a matter of bringing timing, enjoyment and difficulty into perfect harmony.

The problem with both potatoes and physics games is they often don't appeal in their looks, so many developers love throwing on lots of gravy that invariably makes a slop of thing and slows down your browser. Let It Glow is not an army cook dishing it out to the troops. It's a carefully-crafted experience that may seem unappealing to the newcomer and the casual physics philistine. If you appreciate the subtle nuances of this genre and how with a few small touches, some expert preparation and just the right balance of taste and execution a physics game can really be fun, you'll love Let It Glow. No, it won't blow you away - after all, no matter how deftly you cook a potato it will never trump a steak. But it is familiar, reliable and if done right never lets you down either.

Lots of fun so far. I got really stuck on one level, but it was just a matter of trial and error. Now I'm stuck on Level 6 ... and I'm all out of ideas!

"No, it won't blow you away - after all, no matter how deftly you cook a potato it will never trump a steak. But it is familiar, reliable and if done right never lets you down either"

Hint for level 6: Timing is essential in this level

"the aim being to position one /of/ more"

"The range of a conductor can differ from puzzle to puzzle, indicated by a /feint/ circle around the conductor."

"Adding some variety to the challenge, some pieces are attached to /hinged/ and other ones, made of steel, can't be removed."

I think you mean 'some pieces are attached to /hinges/'

Just trying to help out! I didn't scan very carefully, so there might be mistakes I missed. These were just the ones I noticed when reading. I'll stop nit-picking and go check out the game now, shall I?

Aaaagh ... I figured out Level 6 pretty quickly, then sped on ahead to Level 20. I have been at it for longer than I'd care to admit. I am stumped. will check back soon for some help *hint hint*

PS: James Francis, I worked in publishing for years and I think your writing (nay, *all* of the writing on JIG) is excellent. As for any minor errors, we always used to say "that's what proofreaders are for!"

wonderful level design! because of the precision of the levels it never took me too long to find the solution, but each time I did I thoroughly enjoyed it :)

I occasionally consulted the solutions (but usually only after many trials and errors). Fun little game. Not an original concept, but well-done. Didn't take too long to beat the game. Also, I'm vegetarian, so potatoes always beat steak. :P

Yeah, I nearly threw in a soy reference. But not Tofu. Sorry, I just do not get Tofu.

the game was awesome, 20th level was the most difficult but your hint was useful......:)
awesome techniques and strategies.....:)