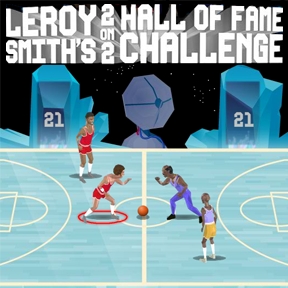 In this day and age, we could all use a little motivation, right? How about a double helping of it, courtesy of the self-proclaimed man who motivated Michael Jordan to become the greatest basketball player ever? That's right, Leroy Smith is here to save the Internets and your next break with what he considers the best video game ever made: Leroy Smith's 2 on 2 Hall of Fame Challenge.

At its core, Leroy Smith's 2 on 2 Hall of Fame Challenge is an all-out, high dunking arcade basketball game similar to Arch Rivals and NBA Jam. You control the players facing Team Leroy in a little hoop action. The controls are relatively simple: move your players with the [arrow] keys, switch to a teammate with [Z], pass or jump with [X], and shoot or defend with [C]. To dunk, just run close to the basket and press [C] to watch some high-flying aerial artistry. Each of the game's three periods lasts one minute, and you have ten seconds to shoot before turning over the ball. 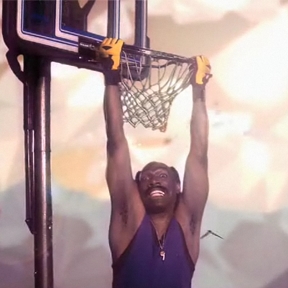 While the concept isn't new, 2 on 2 Hall of Fame Challenge has something that previous games have definitely lacked: Leroy Smith. Leroy is constantly in your face, whether it's his amusing sound taunts during gameplay or grainy VHS-quality videos of his motivational antics. The game (as well as his whole site) simply wallows in the awesomeness that is Leroy.

Gameplay-wise, the basketball challenge has fun aspects that makes you want to replay it until you can actually defeat the esteemed Mr. Smith. The game's graphics, with its polygonal characters and bizarrely-themed environments, are definitely cheesy but have a charming old school feel. There are also some nicely retro-sounding chip tunes to accompany the action, which may have Leroy sailing and spinning over a hundred feet in the air on his way to another impressive dunk. The controls aren't always precise, and the AI gets harder each period (to the point that it could be accused of cheating), but Team Leroy can indeed be defeated with enough practice. Can you do it? Are you ready to get motivized? Shazaaaam!

that's charlie murphy, eddie murphy's brother. he used the be on the chappelle show

This was surprisingly hard (to me, at least). Game itself is pretty bad (too short, really hard to get control , but I guess you play this game for sheer ludicrousness and fun anyways.2/5 in my opinion

Wow! I thought the main character looked like Eddy Murphy...!!!

This is pretty challenging, but it's so awesomely satisfying when you can pull off a trick shot (if that's what they're called in NBL).

Fun game, but commentary and presentation really put it over the top for me. Charlie Murphy is hilariously awesome.