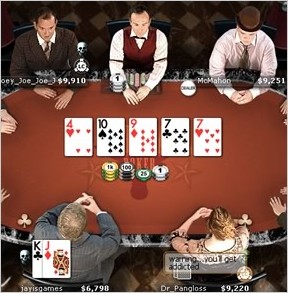 For anyone who was left wanting more from yesterday's post, this next Texas Hold'em poker game offers something a little different than most games in this category.

When you register with the site, you are given $10,000 in chips to play with as you wish. Begin by entering the Lobby and selecting a room to play in, but choose wisely. Review the description of each room to learn: what the stakes are ("NL" indicates No Limit poker), the number of players, the average pot for the room, the percentage of players still in after the flop, and the number of hands per hour. If it seems a bit scary at first, practice rooms exist for you to get a feel for the game's interface before risking your hard-earned cash.

If you don't log-in to the Flash game on a Windows computer, a Javascript browser detection script will tell you it is optimized for Windows and that playing on any other OS may result in problems. Having played several games already on a Mac Powerbook, I can tell you that the Flash game will run on both Firefox and Safari, though switching between applications and windows will cause either browser to quit. So be careful.

Each week, the chips are reset, with everyone receiving at least 10 grand. Additional chips are awarded based on a reward structure and the relative achievements of each player. For example, Quicklinks are often exchanged at tables by visiting another player's profile and clicking on the "Add to my Quicklinks" button. Similar to adding someone to a buddy list, the number of Quicklink lists that you appear on can earn you additional chips each week.

How much you get out of the game depends on your relative involvement in the game. On the surface, it's an engaging and well-developed free-money online poker tournament with stats that get reset each week. For players who want to go a little deeper, the reward structure provides incentives to earn additional chips through involvement in the ARG.

The drama all started when Lionel "Lucky" Brown died and left an antique Navy Colt (the Gun) to his great-niece, Lucy Brown. Since then, the gun has changed hands, people have died, and seven (7) episodes have been released, so far, on the LCP website under the heading The Muck. It is there that you can learn all about the story, the characters, and possibly how to earn additional chips.

Once your chips are gone, you must wait until they are reset again, which is every Saturday at 3:00PM Eastern (GMT-5:00).

With thanks to Div for the link to the game, and cheers to Dr. Pangloss and Cindigirl for being such good company at the table. =)

Hi Jay!
Was great playing with you tonite at Last Call. And your site is amazing!
Will be coming back time and time again to play games and read what you have to say.

What is the deal with the found card icons and help the dead icons? can someone explain how we get those?

As for basic player card icons:

To get up to Club level, just look at profiles for Lucy and Lucky. As for finding those, you'll have to do it yourself.

You're right, Cindi...it was fun. And I feel like I met my Dr. Frankenstein - since Jayisgames was the place that turned me on to online gaming and PnC. hee hee hee...

One of the great things about this Poker site is the community. I've had the best time joking around and goofing off with other card players. They're really wonderful people.

The ARG aspect is interesting (as a viral marketing approach) but I always lose track of time when I'm betting all-in with a pair of aces. There's no better rush. ;)

Well, for those of you who aren't satisfied with just ignoring the "advanced game", let me point you in the right direction:

Too busy to read all of that? Okay. Let me give you the short version.

The game, as you can see from the introblurb, is a murder mystery with a front-end. Only people are dying all the time. Western storylines are like that.

Every time a new character is introduced, a "Hole Card" or an in-game character card, is there for the finding. You find them by being the first person to look at the profile.

As for the favors for the dead, you either show up at the live events (see "The Muck") or do something on the side.

The people that run this thing, AvantGames, are doing this for serveral reasons, including to promote the game "GUN". However, it goes beyond that.

If you put in your phone number, they'll call you with in-game updates. Put in your email address, and they'll mail you weekly updates.

Hey, I've been playing this for a few weeks now, and it's totally sucked me in. I love this game. The whole calling and emailing is on Wed. and Sat. at noon pacific time, so it's not too inconvienient. The card frenzy on Sat. and Wed. is when the most puzzle solving happens, but everyone enjoys poker during the week. For me, the biggest rush is playing poker with dead in-game people. Please, go ahead and Quicklink me too!

Just a quick heads-up for new players...if you want to receive calls (they are really cool) go to the "edit profile" screen and make sure your phone number is entered correctly. Some people (including me) had the area code deleted, so the numbers were skewed. It took ages to figure out why I wasn't getting the calls. They might have fixed the bug by now, but I just wanted to let you guys know...because getting a call from a dead guy is one of the top ten things you need to experience before you die. ;)

Now I'm off to bet my stash. Love the reset feature.

Thanks for posting the link Jay! I love this game and thought everybody should know about it. So what better way to do it than to submit it to you. Your site is awesome!

Anyways, I hope I see you at the tables.

Thanks for the heads up. I added you to the poker buddy list.

Hey, Jay...it was great bumping into you last night for a few hands! Love the site, and you've picked another winner with this one. One of the best poker games I have seen, and the people are great!

Nice graphics, I would like to see more games incorporate sotry lines in... perhaps some bots that come on, play poker, and start role playing and talking.. and if you ask them the right questions you can get extra bonuses.

Still, the core is a great poker game.

For anyone looking to increase the number of QuickLink 'poker buddies' you have, which awards you additional cash at reset time, a Wiki has been set up to automate the process of adding all of the names on the list to your profile.

And the best thing is that your name will be added to the list so that you can begin receiving additional QLs, too.

Go to this page and click "Edit" (you will likely need to register with the site first).

Then copy and paste the first entry you see and change the two names to your LastCallPoker username, click save, and you're done.

For those paying attention the last live event and wrap up of this game will be held in LA on Saturday November 19th.

If you want to catch up on the whole story, the site has a redesigned The Muck page, which can help you.
http://www.lastcallpoker.com/themuck/

If you want to find out about the live events
go to the allin page
http://www.lastcallpoker.com/allin/

Anybody else sad that they ruined the game by giving unlimited rebuys?

Any word on where I can find another game with the old format? Where you need to play smart or wait until next week...

JGillen - I am sad, as it's quite uninteresting now in its new format. The dynamics that were created by resetting the chips each week made it exciting to play.

The community, if it sticks around, will be the only thing worth returning for anymore.

Is Last Call Poker no longer working or is it just my computer? I click on "play poker" and the lobby window doesn't load. It comes up as connection to server not made. Anyone else experienced this?

Jay, why are there so few tables in the poker rooms. There used to be so many to choose from, now there aren't many. Can you explain?

jay, what is going on with lcp? i have been unable to play for 24 hours now.

Hi Roseann - I haven't played this one in a while now, and it seems that they have disabled client connections to the server. If it doesn't come back online soon, I'd have to guess that they are shuttering it down. =/

jay, the NL$30 tables have been eleminated. Can they be put back. All of us here at LCP miss playing at the high stakes tables. Please do something!!! :(

Oh no!! This game is taken down! There promotion is now done... now what am I goina do at work?