Hurry up! It's time to collect things because reasons! Well, not every game has to have a story line to be entertaining, and such is the case with action game Land Sliders from Prettygreat for your iOS device. You start with one character, the adventurous roller skate master Turny. Swipe the screen to move. The faster you swipe, the faster your character will move. The default control scheme is swipe the land to move, but you can change it to swipe the direction you want your character to go if it's easier for you. The goal is to collect as many items (in Turny's case it's treasure maps) as possible before you die. If you collect all the items on a level, you are awarded a bonus which ups your score. 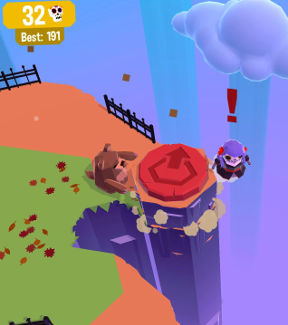 Besides being your score, collecting enough items also levels up your character. When you level up you receive coins which are used to unlock new characters. It would be nice if there were some other benefit, some sort of upgrade to help improve your score, but collecting characters is rather fun. Who doesn't want to play the game as a household appliance or a cute furry animal? There are plenty of ways your game can end. Falling off the side of the world is the first you may encounter. There's also plenty of enemies out to get you. In most cases when you get close enough for a baddie to notice you, they will start to chase you. Luckily, they can die the same way you can, so try to lure a bull off the edge of a cliff, or make a bear fall into a pond. If you are moving fast enough, you can momentarily hover over water, or cross a small gap before falling in, which is useful for getting away from enemies as well as collecting far away items. Watch for the red button as you explore, because that's your ticket off your current island. When you're ready, slide onto it and you'll blast off to a new land. Since the levels are randomly generated, sometimes you run into special items or puzzles on the land. Hot sauce makes you invincible for a bit, and I'll leave it up to you to solve anything else you stumble across. The controls are very responsive, and the music sufficiently peppy. Sometimes it turns out that the simple silly games are the most fun to play.

I thoroughly enjoyed this game. For me however I think it is my low powered tablet it, I had a lot of lag; however restarting my tablet helped get it back to a more normal speed; the lag got worse after every loss so it encouraged me to play better to be able to play longer. This little set back did not stop me from playing; I played for quite a few days before uninstalling.

I mostly got stuck on that restricted puzzle.

For many of the puzzle answers I found the answers here:
lna.payzyepiteiwblrrrdlazhxkq.ifq
http://www.gamezebo.com/2015/09/28/land-sliders-tips-cheats-strategies/

Also,
if you have a disqus account please answer their question
http://toucharcade.com/2015/09/29/land-sliders-coordinates-puzzle/

The game is very fun, I suggest you give it a try if you have not already.