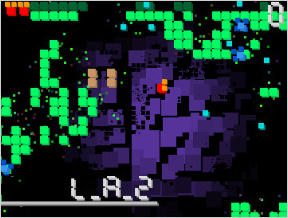 Shmup guru Kenta Cho (creator of Titanion) has released another unique shooting game. L.A.2 is similar to John Conway's game of Life but, well, the opposite. Instead of creating cellular automata, your job is to destroy them. Swarms of cubes grow and multiply around the edges of the screen with the occasional enemy craft hidden amongst them. Maneuver around the screen charging your glider weapon and releasing it to destroy advancing cells.

The same mathematical rules apply to L.A.2 as in Conway's game. Cubes only multiply in groups, so orphaned cells remain still until life reaches out to them once again. Your weapon is likewise limited to traveling across living areas, so aim for the biggest clumps of cubes to make a dent in the creep.

Controls are simple: hold [z] to "charge" your glider weapon, allowing it to consume adjacent cubes, and release to cause the destruction. The more cubes you destroy in one attack the more points you'll get. The game continues until you lose all three lives, which won't be long for many players!

Analysis: The second version of this game is vastly improved over the original L.A.. The first title was mouse-controlled, built using Processing language, and featured a ship that fired destructive bullets from the front and a weapon that made the cubes grow from the back. This game has a more complete feel and is more interesting to sit down and play.

I have mixed feelings about the visuals in L.A.2. On one hand, the color palette is pleasing and the blocky look suits the game well. The shadows on the purple part of the background are a nice touch. On the other hand, the constant flashing and jerking motions made by the creeping lifeforms is disorienting. It's consistent with Life-esque titles (and likely a necessary evil), but in an action game you need to focus on the objects and it can be difficult to get your bearings while everything around you is rapidly changing.

A unique shooting experience that even non-shmup fans will enjoy.

Hahaha that is fantastic and genius.

That was...intense to say the least. It was a lot of fun.

This really is a fun game. I find that there ate two, distinctive knacks to it. Yes, knacks. 1: you can rapid-press the z key and actually plow over the cells, and 2, you can go right up to a large cell blob, hold the z key until all the cells in the blob are affected (You'd probably want to stay dodging) and then release, giving you some big bonus thingy of doom.

Took me a while to get used to the game mechanics. Knowing what caused my ship to be destroyed was difficult as the collision box for the ship is a bit off. You get destroyed through the following -
1 - Touching any bullets (from both tainted and "glider-ed" turrets).
2 - Touching any tainted walls.

You can only score when you destroy turrets. However, destroying turrets gives no scores; only destroying walls gives scores. That means you have to destroy both turrets and walls in the same attempt to gain any score. Scores are also given for walls that have died through the rules of Game of Life. Therefore, you gain more score the longer you hold down the Z key, as long as you have some walls and a turret infected.

The difficulty comes from trying to get a higher score, as infected turrets become very dangerous, shooting bullets more rapidly and chaotically than normal, tainted turrets. To make matters worse, the infected walls does not block off bullets from infected turrets.

I wonder what happens if you destroy all the walls. I mean, theoretically.

Man, I wish I had this game when I was obsessed with Life five years ago.

Tainted cells are harmless, and they block untainted bullets, so you can generally stay alive for a long time by just holding down the Z key, staying in the tainted cell area, and dodging tainted bullets. And collision detection for bullets is very loose.

The difficulty increases over time regardless of what you do. Whenever you die, the difficulty decreases slightly.

You get increasing score for collecting both tainted bullets and tainted cells. First bullet is 1 point. Each additional bullet is +1 point. Then, each cell is +turrets points. So if you collect 2 turrets, 4 bullets, and 3 cells, your score will be

Cells that enter from the edges are completely random.

oh, also, Dr. Blob's Organism is another shmup based on Conway's Game of Life. The Life automaton runs very quickly, so you can't really anticipate it. The gameplay is mostly reflex.

The longer you maintain control over turrets, the more score you get. so effectively, you can get lots of score by holding the "z" button as long as you can.

the best thing to do is get a shield until you taint some turrets as normal turrets can't shoot through brown walls. the tainted bullets are light purple. oh, and sometimes, more than one (tainted) turret shoots at you, it can rise from annoying to deadly in seconds... Boom! Game Over...