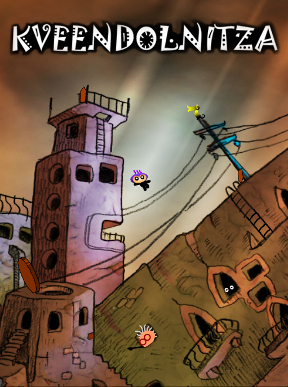 Ah, the search for legendary places of magic! The impetus for many a good adventure story, movie and game. It all starts with legends of ancient beings who mastered the secrets of time and space. But ancient beings, being wise or perhaps merely selfish, always ensconce their great knowledge far from dull eyes of the searching masses never to be discovered. Or not before the charming hero of our story—Nicolas Cage? Harrison Ford? No, Triton!—arrives on scene. For no one knows what it is or where it is, but all wish to find Kveendolnitza.

To do so in this puzzle and exploration game, just point and click your way through an Escher-esque city of stairs and pathways, using wits and ingenuity to get past doors and unusual creatures. This surreal world created by Jacek Szleszyński is a beautiful sight, worth playing, if for no other reason, to ogle every visual delight. Even the ambient sounds and serene music are an aural treat. Yet the gameplay is also enjoyable for the discovery aspects as well as the pleasure of solving a few light puzzles, including a touch of arithmetic and astronomy (just as you would expect from those sagacious ancients!) They're nothing to take you out of the moment, needing just a bit of thought to solve, although you will rely just as much on trial and error. An occasional bout of lag might momentarily pause click-efforts, yet it's rare and brief if it occurs. Similar in concept to Samorost or Hapland, although very unique in its own style, there's plenty of interactivity in Kveendolnitza, both for amusement and to aid Triton toward his goal. In most cases, the clues are apparent and everything works perfectly although there is at least one spot where you'll need precise pointing to activate the area properly.

Contrary to what reading Jules Verne might lead you to believe, not all quests will successfully uncover hidden worlds or mystical oracles. Two possibilities await you: you could reach the end having nothing more to show for it than a few extra fingerprints on your mouse—or you just might, if you're clever enough or lucky indeed, discover Kveendolnitza for yourself. As for what comes next after you find it, well, that's what sequels are for!

Some Tips before Starting

Beginning to Through the Red Door

From Below the Tree to the Yellow Door

Use the Plate and Open the Hatch

Green Licker and Passing a Devil

The Edge Over the Dome

Inside the Dome and a Waving Red/Black Flag

The Blue Key to the Cannon

After the Cannon to the Steel Beam

Picking Fruit and Moving Up to the Cottage

Getting Past Electrical Wires and Square Towers

Start in the top left quarter of the screen...move a couple inches down and then slowly over to an inch or so.

Now you have two choices which will determine the ending you get...

Note: if you want to find Kveendolnitza, then, when the dragon flies away, DON'T click the signpost!

The Secret to Discovering Kveendolnitza

Aww... beat the game but no Kveendolnitza. And no clue what to do to find it.

Beat the game again. This time I got it... and I'm still not sure exactly how.

I'm stuck on the balcony above the white spider that drops down when I click it.

Do you think it is playing the guitar at the final scene before you leave - it is the only thing I can think I did differently?

Click on the loose boulder behind you, then on the cannon, you should be able to go on from there

Dang it, what do I do with this stupid

Try putting it somewhere where there's not enough ladder. Like there near the lower right corner.

Some Tips before Starting

Beginning to Through the Red Door

From Below the Tree to the Yellow Door

Use the Plate and Open the Hatch

Green Licker and Passing a Devil

The Edge Over the Dome

Inside the Dome and a Waving Red/Black Flag

The Blue Key to the Cannon

After the Cannon to the Steel Beam

Picking Fruit and Moving Up to the Cottage

Getting Past Electrical Wires and Square Towers

Start in the top left quarter of the screen...move a couple inches down and then slowly over to an inch or so.

Now you have two choices which will determine the ending you get...

Note: if you want to find Kveendolnitza, then, when the dragon flies away, DON'T click the signpost!

The Secret to Discovering Kveendolnitza

Could this be the cutest character ever? I'm goo.

Nice little philosophical comment on not getting in a rut. If you always do the same thing, even if it has always proven to be the "right road", you may still end up without achieving the ultimate goal.

Yes he is! He won my heart with his little "wild man" yell. Too adorable!

How did you do that "replied to comment from dsrtrosy"

Such a newb around here sorry :(

[Presently, only JIG authors can use the 'reply' feature, which is part of the site administration interface. We are working on rolling the feature out to the entire JIG community, but there are a couple of issues to work out first. -Jay]

Thanks for making me think I am not going mad ... though of course I am!

Both this and i saw her standing there, both posted today, have great music. Is there anyway to get the music for either for our own leisurely listening?

I'll keep a look out for the Kveendolnitza music and will post it if I find it.

See my comment on the i saw her standing there review page for a link to the soundtrack.

I did the ending that didn't play the guitar. I'd kinda like to hear it, but I don't want to play the whole game again lol. The little bit that Triton plays in the game sounded kinda cool though.

Elle, Tab does *not* hilite action spots, it resets the game entirely to the beginning. Unfortunately, I had gotten all the way through the math problem when I made the mistake of taking your advice to look for the next way to go (since I couldn't find the spot to click to make him progress), and I'm in no mood to start all the way over again. :-( Please *check* your information before posting a walkthrough.

[When playing an earlier version of the game, it worked that way. The developer must have changed the functionality during the recent update. My apologies. Correcting the walkthrough. ~elle]

I'm sorry that happened to you, vulpisfoxfire, but thank you for making us aware of your unpleasant experience. It must have been frustrating and upsetting to see the game reset like that without any warning or confirmation. I hope the developer updates the game again and changes that very rude and unfriendly "feature."

We have removed mention of using the [tab] key in the walkthrough, in fact we have added a bold warning at the top of the walkthrough to avoid pressing [tab] at all during play. Hopefully that will help prevent other players from falling into that trap.

Beyond that, I stand by my entire review and walkthrough team. They work very hard to provide not only entertaining and informative reviews, but also the best walkthroughs on the internets.

UPDATE: Jacek just updated the game to remove all functionality of the [tab] key. He says his initial update was to disable tab, but it turned out badly. I can confirm that this latest update disables tab completely.

i luv this kind of game... sweet graphics reminisce of samorost...
thanks for all your hard work, jay!
and thank you elle!

I wish the tab key showed the hotspots in all games. After all, it's a game, not a test.

I'd rather use tab to see where I can click than have to read a walkthrough. Not that I don't appreciate the walkthroughs; I often read them even when I don't need them, but ideally I like to read them so the walkthrough is a bit behind my own solving.

Very short but very good for what it is.

Any possibility of a sequel?

Prior to beginning: I already know I'll love it. I've Favorited it. Thirsty for more, send more. I'm on the watch. Thank you for sharing. Very beautiful, and yes, I knew it- fun!

Dear Jacek S, I hope you read this.

I'm in Love with Triton and the other characters, especially the

green guy who only goes left and right

.
Very sweet, very smiley feeling, keep the good work, I definitely will play every single game you make! You have got a new fan for new year's!

Wishing everyone lots of fun with the game.
P.S. I didn't find the Kveendolnitza, but I will replay (many times?).