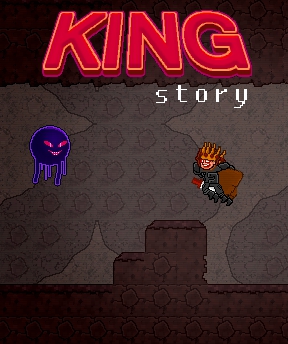 The hermit's son has been kidnapped by demons! Are you a good enough king to rescue him? And, while you're at it, could you do something about that advancing violet wall of doom? And, also, could you tell the peasants to knock it off with all the portentous statements concerning the upcoming apocalypse? It seems that a monarch's work is never done. Though, in fairness, by the end of KingStory, the new adventure platformer from KintoGames, you'll have a pretty sweet crown on your head. That makes it all worthwhile.

Moving with the [arrow] keys and jumping with the [spacebar], you traverse a fantasy world beset by an evil both vague and purple. Interact with other creatures by pressing [up]. Once you have a weapon, you can then attack demons by smashing into them: the faster you go, the more damage you'll do. Items unlock new abilities and let you reach new areas. Some aspects of KingStory require careful timing and observation, while others require nothing more than running like heck. You'll have to have fast reflexes to know which is which.

While KingStory's has gorgeous pixel graphics (especially the ghoulishly creepy enemies), a delightfully eerie soundtrack, and solid gameplay, it has a tone that can only be described as schizophrenic. A fellow reviewer remarked that it was the kind of game that couldn't decide whether it wanted to be a platformer, an action-RPG or Canabalt. That's a pretty accurate assessment. Also, it is deceptively short: once it seems you are finally about to set off on your grand adventure, the game abruptly ends. It's especially odd since so much of the text has that "cryptic foreshadowing that will make probable sense by the end of the game" edge to it, except, since the end comes so early, all you're left with is the cryptic stuff. Hopefully the implied sequel is soon in coming. Despite the above reservations, there's still a lot to like about KingStory. The collision combat system is intuitive and deserves to be developed further as a mechanic. More importantly though, there is a breath of uniqueness to KingStory that inclines one to be forgiving of its faults. Games that experiment aren't always perfect, but they are rarely dull.

Well, this game was.. really good. A RPG metroidvania with elements of Canabalt.. original and yet well made. The only real complaint I have is about the abrupt end.. that's the second time a game disappoints me on this point since the beginning of this week, and it leaves me with a bitter taste in the mouth.
Except from that, thanks, JIG, really awesome 'beginning of a game'.

Is there a way to save without having to be on the save pad (like the one in the hermit's house?)?

It is in no way like Canabalt. Rather it is much more like an Action RPG mixed with Dino Run.

(Dark cloud of destruction chasing you)

I liked it, though the boss was kind of...over simplistic. I kept thinking "do I really just hide in this hole and hit him a few times until he's dead?"

The end was kind of put at a weird place too, even for a series. Introducing you to a new town just to end it just seems strange.

The simplified attack mechanic was a nice addition. I've always kind of liked games like that. Not a big fan of the single-tile-high jumping though. That was a bit annoying. It made me feel like I was controlling an old man any time I was jumping up steps.

Anyway, if a fat plumber can make it over a freakin' two-tile-high ledge, everyone should be able to!

Loved the art though. Especially the halo of light that surrounds you in dark areas. That was a nice touch.

This game is neat, but way too short... It barely started, I have trouble thinking it's over... The bridge _is_ the end, right? There's nothing else?

There is no way to survive the bridge?
Can you jump it? I'm going to try...

Nope. You cannot jump. If you jump, the arrow moves to hit you.

It would be a kindness if there were save points closer to the beginning of the "Dino Run"-type segments. Not amusing to keep winding up in the Hermit's house. (And yeah, I SUCK at platforming when there is a wave of darkness chasing me! THE PRESSURE! AUUUUGH!)

actually ducking at the right time allows you to survive the arrow, but if you continue walking to the right, you die automatically

It was a great game, but now I wish I hadn't played it. It felt like a really awesome demo for a game I would have been happy to pay $10-15 for another 10+ hours of, but not even having that option leaves a bad taste in my mouth. This is the same reason I have been holding off on playing more of Mardek RPG since I finished the second. I want to play, but I don't want to have wait months or years for another bite.

It took me a while to figure it out, and I couldn't move on because of it--you can actually jump two tiles high, not one, if you hold the spacebar for longer. Somehow as normal as that is for games like this I had trouble realizing, and apparently so did other people.

How is everyone else saving? I have found no pads in the Hermit's house that allow me to save.