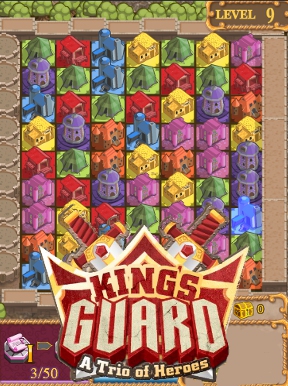 Ready thine sword, shield, and glowy energy firing staff thingy, brave knight! IriySoft is about to send you to the frontlines in King's Guard, a match-3/defense/RPG hybrid. Please note that players who are colour blind will likely have difficulty with this game.

King's Guard borrows pretty heavily from Puzzle Quest's core mechanics. Each hero is guarding a road leading to your fortress and will defend their road (and only their road) against the waves of monsters that approach. The attack automatically, and it's your job to heal them and provide them with reinforcements by matching coloured buildings on the puzzle board. Each hero has a corresponding colour; red for the knight, green for the horsemen, and dark purple for the sorcess. Match three of that colour to heal the appropriate hero, and match four or more to unlock a special ability token that you can click to activate, ranging from spells that help clear the board to abilities that disable or otherwise hamper your enemies. 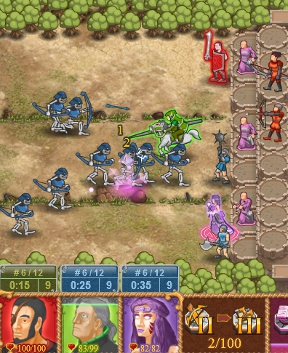 Naturally, all of your heroes have a finite amount of health, and once that's gone, they die with a satisfying "YAAARGH" death rattle. While they can be revived if you manage to match enough of their particular colour, you'll most likely have to rely on any reinforcement units to pick up the slack. After each victory, your heroes will gain experience and possibly level up, and you'll get a chance to equip them with more powerful weapons and armor so that the green hero only dies once per battle instead of every five seconds. (I hate him so much.)

Of course, your biggest opponent is actually Luck herself, cruel and spiteful mistress of the board that she is. Something about the design of the board also manages to be somehow both too busy and too simplistic, and it isn't really something that lends itself well to being stared at for long periods of time unless you have the ability to physically remove your eyeballs from your head and give them a soothing massage. Still, while it lacks the strategic draw of IriySoft's earlier juggernaut defense title, Cursed Treasure, King's Guard manages to hold a lot of snappy appeal. There's something to be said for trying something new, and if you don't expect too much depth from it, it'll provide a surprisingly fun way to sink an hour or more. The pace is fast, the gameplay is simple with a few clever layers, and it's all wrapped up in a nice coat of polish.

I found this game mildly entertaining at first but then frustrating to maintain progress in. The main problems are:

* The game rewards you for focusing 99% of your attention on the grid, because you need to keep a steady supply of power-ups and clearances. So you don't really engage with the idea that your heroes and guards are busy killing the threats to the kingdom.
* There is a fair amount of grinding required.
* If one of your heroes dies, it becomes very difficult to recover from that - you have to clear A LOT of their colour from the grid to resurrect them. Very frustrating when it happens right at the end of a level.

I'd have to agree with the review--there is something about the game board that just isn't fun to look at after a while. And I'd also agree with Tom--I find myself staring at the grid almost exclusively and, for the most part, ignoring what is going on with my heroes and the battle. It would be nice if there were more of an interplay between the two.

Got to level 7 before the grinding the earlier commenter mentioned killed the fun for me. Nice concept, but I'd like to see it with better graphic design and more balanced stats.

This froze my computer twice on the load screen. which is too bad, as I now have the urge to log back into Whirled and play Corpse Craft.

I found the toughest part was just how SLOW the game got later on. Each level is over 20 mins, and there's no way to speed up the waves unlike towerdef games and such.
In addition, there was absolutely no way for me to get the "all reinforce to lvl 5" as the requirements for that get plain silly (400 MATCHES not tiles, from BOTH 3-4 and 4-5). I've beaten the game and have only gotten to lvl 5 once on one type.
Though you really could just play it "casually" once you get a good number of reinforcements, the start of the game is rather dangerous to the two meleers as there's quite a few enemies who will take huge chucks off their hp with their ranged attacks. Or explode in their faces when they die. The mage though can just sit back and not require a single thing. And if she gets hurt, she gets like 5 hp per match making healing her a breeze.

I feel that two main things should be done to make it more engaging:
Make all the heroes "ranged". Right now the balance is shot mainly because of that. Ranged attacks are just too vital against many types, and there's no enemy that's really immune to ranged attacks.
Make it that when you match, the hero attacks rather than automatically. Right now it isn't obviously that saving up some matches is often a good idea as you're basically frantically trying to match everything all the time, but with this, it forces players to play a lot more strategically.
Reduce the grind. Make things quicker. One thing about match 3 games is that they tend to be relaxing. This is not. This is STRESSFUL. Even timed match 3 games tend to only last 5 minutes at most. It may be possible to change it into a turn based game esp combined with the other suggest, though that'll really be a different game.

There's this beautifully animated fantasy war going on and you get to occasionally glimpse a bit of it out of the corner of your left eye. Very strange.

I got a lot of mileage out of the knight's "die at the drop of a hat despite becoming the sole focus of the equipment budget so he'll knock that off" ability. Really makes the game.

For once, a game where the mage ISN'T useless!

I'm enjoying the game - the main downside that the levels being so long means it wears out your mouse-clicking hand faster. Agreed that there is some major imbalance though - on the later levels, I'm having to get a full roster on the two men in order to avoid the 'tink tink' of tiles being hammered at (which seems to be happening if I leave the dragons(?) at my face for any length of time even WITH a full roster). The mage? Can be left completely on her own for the entire round.

Someone over at Kongregate mentioned this, and I am just so glad it wasn't just me:

Notice that the green knight, the one in the middle, dies like breathing, whereas the mage you can almost entirely ignore? Yeah. That leads to the mage getting ridiculously high in levels, because she doesn't need any backup -- seems that having guards cuts down on the heroes' XP acquisition, or something. Which makes sense, as the mage is ranged...

Alls I know is, I got up to level 15 with the mage, 12 with the paladin, and like 7 with the knight, because he kept &%($ dying. And then I gave up, because bah, my hands started hurting.

I hope this game gets some improvement, because I really do like the concept, and I didn't grind my way up to level 11.3 (averaged) because I hated it. But meh, they should balance out XP earning somehow.

A very interesting game, but with too many problems. Nothing that cannot be fixed, though.

The most frustrating part is the pace. 15 to 20 minutes per level is wayyyy to long. I missed "Triumph" for a few levels and I don't know if I'll be motivated enough to replay these. Also the delay you need to wait after a match before you can perform the next move is annoying. Most modern match-3 games allow to play while other pieces are falling. This slows down the pace unnecessarily.

There are also many alignment detection issues. Sometimes when a 5-piece L-shape is created, only one 3-match is detected. Such a bug in the core game mechanics should really not happen. Another bug often let me place twice the same unit, most usually when starting the drag before the end of a Heroic Charge.

And there are the visibility issues. The "Heroic Charge" logo, which appears for a supposedly rewarding action, actually hides half the playing field. The pieces highlight when the mouse goes over them, which can make a red piece look orange or a purple piece look pink. Again, the highlight is supposed to be useful but I found it annoying.

I agree with most other remarks regarding the unbalanced unit characteristics. My strategy to keep the green hero alive is to always keep a few Cavalry Charge bonus tiles ready. But of course, luck goes into the way.

That said, it's interesting to see a match-3 game that rewards 4-piece matches more than chain reactions. And mixing a tower defense game was tricky, but reasonably enjoyable for a first iteration. I'm waiting for King's Guard 2.

Does anyone know how many levels are in this game? I'm grinding on level 9 trying to make 10. I'm hoping it ends at 10 or I'm quitting.