It has been but days since you and your sister were forced to move to Ashbane, The City of Rats. For all the rumors you've heard, the experience of being in the Hernessian Guard is ten times worse, with threats both magical and scientific threatening the populace from every side. Recently, you uncovered evidence of a conspiracy to assassinate one of Ashbane's leaders through the use of a horrific weapon that has already killed dozens of innocents. You must track the assassin, bring them to justice, and, maybe, shine a little light of truth into the Kingdom of Liars. Kingdom of Liars 2 is the second in the series of dark fantasy point-and-click adventures from Hyptosis, and the plot only gets thicker from here. 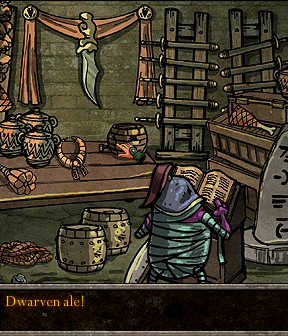 Point and click to interact with the main game window, and be sure to note to the way your cursor changes to denote people to speak to, items of interest, or objects to pick up. Once something is in your inventory at the bottom of the screen, just click to select it, and then again wherever you want to use it. With his admittedly admirable drive for experimentation, Hyptosis' games have been a little hit and miss as of late, so it's refreshing to see him revel it what he's great at: world-building, colorful characters, humorous descriptions, intriguing twists... and smacking players with the ending just as things are getting good. Oh well, even a short trip through Hyptosis' mind is a good one, and, no fibbin', Kingdom of Liars 2 is excellent.

Bazaar of CourBoyn the Merchant

Bazaar of CourBoyn the Merchant

The review makes it sound like this is the second of what will be many episodes... but it's not. There was no "To be continued", there was just a "The End". The story concluded. That's all she wrote. Finito.

Um... I don't mean to be rude but did you actually play this game Tricky?

How to play in full screen ?

My apologies, Dandy. You are right that I incorrectly conflated the fact that sequels are indeed planned for Kingdom of Liars (hence the "year one" subtitle) with a sense of narrative incompleteness, which is not the case here. I have changed my wording to reflect that.

However, there are bits in the story that I feel are left incomplete. By the end, it still feels like most of the conspirators have gotten away with it... Sam Vimes would never stand for that! Also, what's the deal with that temple?

That said, I assure you that I take my reviewership duties (perhaps too) seriously, and played this one through to the end before I started writing my review (though, admittedly, with massive help from Trinn's walkthrough). You are right to expect nothing less.

Smooth and witty, almost Ankhian. I love all the details! Ending too abrupt.

If this was indeed

the last episode - which is a shame, since it's only the second

then this is the first time Hyptosis has let me down. Admittedly, when he does, he sure makes you feel it. Compared to Alice is Dead, Hood and even Kingdom of Liars I, this is a total failure game-wise. Great visuals, good sound to accompany them, but the net result is a highly polished turd, I'm afraid. Neither the story nor gameplay in general are done even the slightest bit of justice.

It kinda rattles my cage, because I was _really_ impressed with all the other work I played.

Not very interesting. The only puzzle is the one on the door, which is absurdly easy. Everything else is just find an obvious item and use it progress in a straight line. On top of that the story is really boring, no interesting twists, just simplistic chase that ends in a boring way.

The art and the sound is great, and the setting is fantastic, but that only gets you so far.

I was surprised when the ending happened, it felt like the game had only just started. Even the art is recycled with most scenes the same as in the previous episode. I do still like the atmosphere i just wish there was a bit more to the game.

Is Warren the brother of the protagonist in Hood? I think I remember seeing a portrait of him in Hood Episode 4. It's nice to see some kind of continuity with the other games if so.

Something seems to be wrong with the game--all the links to it pull up the JIG page as normal, but instead of the game, the flash pane directs to some site called PlayWire, and a video that won't load--it also blocks out the 'windowshade' button that lets you darken the background while playing.

Correction, this seems to be happening on all the Flash games I've tried tonight. Instead of it loading the game, all I'm seeing is a flash-video player that looks like a knockoff of the YouTube one attempting to load a video but not actually completing. Clicking the PlayWire link takes me to a rather amaterish-looking website claiming to be providing a revenue maker. Either JIG's been hacked and this wedged in, or you've tried a broken web-ad method.

The site hasn't been hacked, we switched to a new video ad wrapper earlier today, and it's working in every browser tested on both Mac and Windows. We have been getting reports, though, like yours today, and we are trying to figure out what is causing the problem for some people.