King of Bees in Fantasy Land

King of Bees in Fantasy Land, a Twine text adventure game by Brendan Patrick Hennessy, hails to an earlier time of video game plotting. One where the story started with the enemy saying that "all your base are belong to us", but if the player managed to not "feel asleep" and "attack aggressively", they would soon fine the game serving up a hearty "CONGRATURATION" as a blessed reward. ("They didn't even bother giving you multiple ones! Just a single congraturation they had lying around the video game make place.") King of Bees presents such a literary epic, but without all that silly platforming and shooting and stuff getting in the way. Suffice to say, it is the year 2888, and as head space knight of the number 4 astro-boat searching for a habitable planet for the remnants of humanity, you've come upon Garaxas world. A veritable fantasy-land, there is but one problem: the Evil Bee King rules the planet with an iron feeler from the safety of Bee Fort. Can you possibly topple the King and make the planet safe for human-types? Only you know for sure! 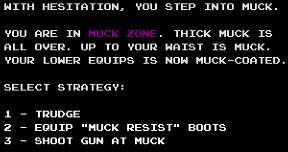 The prose will lead to various points where you must choose a course of action by clicking the desired option. Some choices will grant you various items and abilities, which may unlock different choices, though generally you'll be traveling through each of the game's "worlds" in a set order. If all King of Bees in Fantasy Land had going for it was non-standard grammar, the joke would probably get stale by the end... and not to mention a little offensive to beleaguered underpaid translators worldwide. However, its focus is on examining and parodying the storytelling tropes of the 8-bit era, and though that has been done before, it is a well that will probably never run dry. Additionally there is a quite cool perspective shift end game that's handled quite interestingly, and may make a play-through of King of Bees in Fantasy worthwhile just to see how the author chooses to get all clever and stuff. In short, those looking for a quick, smart piece of video game comedy should definitely give King of Bees in Fantasy Land a try. A WINNER IS IT!

Fantastic. I really enjoyed the perspective shift, and the additional scenes and ending were definitely worth the quick replay.

A very clever game. You can hit the back button if you want to replay a scene. Frankly, I wasn't expecting to be moved by it, but I was.

I really try hard but I couldn't manage to

Yeah, if you sign the treaty, you die but I think treaty is pretty fair. So it is not losing.

I read none of the text at all.
I clicked on random options every time.
I achieved full victory.