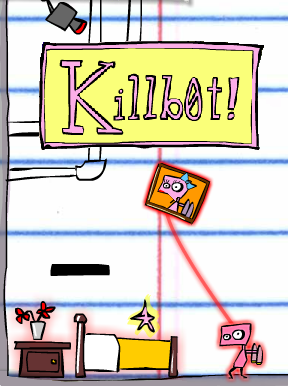 What kind of life can there be for a Killbot who doesn't want to kill? It appears that when Killbot Industries fails to install a conscience inhibitor properly, you're left with a mild-mannered pink android who'd prefer to use his telekinetic powers for playing dress-up and smelling roses, rather than sowing destruction. And well... how can you not want to help the lil' guy out? Killbot, a puzzle-platforming adventure by PixelWelders, is an off-kilter blend of a thousand different gaming inspirations.

First, you have the Robot Wanting to escape the factory, with the usual gap-jumping and button-pressing that implies. Then there's the Portal-esque snarky narration and Gravity Gun-styled telekinesis. There's the hand-drawn-on-a-notebook aesthetic that's a mix of Fancy Pants Man and Salad Fingers. Finally, there's the techno album by US Killbotics that the game is somewhat aggressive in plugging, and for which free download codes are offered throughout. All these competing influences, combined with glitchy controls, end up making Killbot feel like kind of a mess, though a very engaging one. It's clear that the developers have a lot of cool ideas to bring to flash gaming, and the refinement of the craft is certain to come with further releases. All in all, Killbot is a cool debut, and one worth killing some time on.

That was rather fun. A mixture between difficult left handed keyboaring with right handed mousing. I kept forgetting that i could

use space to freeze the blocks mid air

Very fun, really love how if you can do it right you can fly with the physics.

I love the Brad-Bourne-like esthetic of this game, am less thrilled with the sloppy controls. But at least, if you can't always be sure how far you're going to jump or how much you're going to slide, there is no dying. And the really tricksy mazes also make it less easy than you'd think for a "no-dying" kind of game.

Popelady you can change the controls in the option screen at the menu.

I don't see a save though, and it didnt autosave for me. Am I just not seeing it?

Yaddab -- It automatically saves each level as you complete it, but if you quit in the middle of a level, you lose progress. :(

There's something almost sandboxy about this game. I finished it, but didn't get 100 percent in two levels and now, despite my grumbling about the controls, I kind of want to go back and find those final stars.

Also kind of want to do more crowd surfing.