You know, I wouldn't exactly call myself a Biblical scholar, but I really don't remember the part in the story of Noah where God called down fleets of giant robots along with the rains. But if Berzerk Studios' Kick the Critter is to be believed, this is but one of the many trials faced by poor Noah in addition to his sudden acquisition of beachfront property. Or rather, faced by one small, unassuming beastie whom the perhaps not-so-poor Noah unceremoniously voted off the boat. Since he's kind of into the whole "perpetuation of his species" thing, you'll have to help launch him to get him onto the ark. Just click to set the angle and power of your kick, and watch him fly! You can click again when he's airborne to send him dashing forward, and if the type of kicker you're using has any "Smash" shots, you can press the [spacebar] when he gets close to the ground for additional kicks. Oh, did we mention that you can buy a wide range range of alternate kicking machines with different stats, so you can tailor your critter-kicking experience to your liking? Because you can totally do that. You can also upgrade your critter, and even the various obstacles and objects scattered around the field have their own power levels. And did we mention that you can even play a variety of amusing minigames in-between your punting sessions? While it starts off with the simple arcade formula that makes launch games so addictive, Kick the Critter brings with it a wealth of extra content. 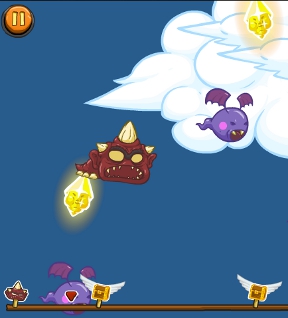 The actual "launch" portion of Kick the Critter has just about everything in it you'd want out of a launch game. The dash and "Smash" kicks that you can perform lend the launching more player interaction, so it doesn't descend into a game of "Click twice and watch what happens." While luck does still factor into your success at Kick the Critter, it helps ease your reliance on chance both with its dash attack, which allows you to ram towards objects you really want to use, and its item-based upgrades. They'll allow you to increase or decrease the frequency of certain items appearing, and make them more powerful when they do appear. The ability to reset your upgrades is especially useful here: Kick the Critter's strategy does change significantly as the game progresses, and being able to change your abilities on the fly to suit different playstyles prevents a lot of grinding and frustration. Unfortunately, grinding does still persist. The kicker machines and their upgrades are too expensive for the rate at which you earn money. The critter himself levels up faster, but it's the machines that really make your progress, and it takes several runs to be able to afford even their early upgrades. The add-on minigames provide a source of additional money, and for small bonus games, they do have tight design and enough gameplay variety (such as an avoidance game, or a Flappy Bird-alike) to keep your attention. But they only pay out when you reach certain milestones, so they can't be used as a continual source of alternate income. Although it's unfortunately lengthened by this excess of grinding, Kick the Critter is a technically-strong, content-rich experience with a ton of personality.

This game has a big loud ad video at the start that has no volume control. So, I had to stop everything else I was doing and mute so it would shut up. But, silver lining, this is just another one of those stupid fly through the air and hope random things make you go really far games so I'll never have to see that ad again. :-(

Sorry to hear that! I didn't see any loud ad video. Although a lot of people enjoy this type of game, clearly you don't, so hopefully one of the other games on the site are more to your personal tastes. :)

Yeah, I had the same loud intro ad at the beginning from berzerkstudios with really loud heavy metal music.
I was wearing headphones, which I had to remove.
The game was fun for about ten minutes.

What you're referring to as an ad is actually the developer's splash screen, which is something all developers put in their games. That might be good feedback for you to send to Berzerk if it's a problem for you! :)

I couldn't see why the game was rated ":S" until I reached the bonus chests. Wow.

Usually I like Berzerk's games -- but this one was a ton of grinding to make very little progress.

When the upgrades are too expensive, the levels progress slowly, and the better upgrades are locked until high levels, I just can't stay interested.

Everybody hits a clunker now and again.

@LightWarrior: I also chose to give it that rating because of the way the Batties die, in addition to some language that appears later on.

I don't rate this for a number of reasons.

It's more luck than skill getting the sliders in the right spot.
I hate how it resets you back to the very start if you make it through the 1st stage. (Creator needs to refer to how "Burrito Bison" solved this issue).
The amount earned per launch is laughable.

I've played most of Berzerk's games. While I do enjoy launch games, and this one has all the artistic polish I expect from Berzerk, it's not properly balanced. At least it doesn't have microtransactions...

Like others have said, progress is much too slow. The launcher cost and stats are also really imbalanced. It's difficult to get to the next launcher when you're making so little per run, which encourages you to level up your current launcher. But then, when you buy a new launcher, its stats start out lower than the upgraded one you're using, forcing you to have to spend nearly as much as the next level launcher to make it worth your while. Very bad upgrade system.