When Meatloaf said he would do anything for love except that, do you think he was referring to angry mobs with pitchforks and complex platforming puzzles suspended over deadly spike traps? Because I think that's reasonable. But apparently I'm not as much of a romantic as the two titular heroes of Meowbeast's Jim Loves Mary, because even though Mary's parents disapprove of our boy Jim to rather extreme degrees, they're willing to do whatever it takes and brave any danger to be together. Use [WASD] to control Jim, and the [arrow] keys to control Mary, aiming to bring them together in each level. Mary can fit through smaller places and pass by her family unharmed, but since they'll take a swing at Jim whenever possible, you'll want to try to grab all three hearts on each stage, each of which will allow him to survive a hit... if not a plunge into a pit of spikes. 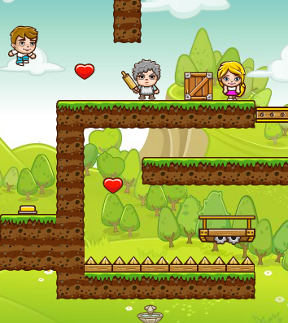 Mechanically speaking, Jim Loves Mary is essentially a cross between the Fireboy and Watergirl series and games like One and One Story. Just because it's familiar, however, doesn't mean you should pass it by. A lot of games will task you with gathering X optional item on a stage, but by making the hearts valuable to you through allowing Jim to survive a hit, you've got incentive beyond simple hoarding to snatch them up. For some players, both the challenge and variety may ramp up too slowly, and the game is never going to become a real brain-twister. But it's fun, charmingly designed, and engagingly casual in a way that makes it a perfect choice to fill up spare time with just enough puzzling to give your head a workout without breaking a sweat.

A bit disturbing that her face goes all turtle instead of the sprite ducking under, and that they change her name in the intro. I like the art style.

I think it's just a matter of some awkward translation errors (Jim gets referred to as John at one point), and I think she's supposed to be crawling through on her hands and knees, but since she's facing the player it looks odd. :)

Adorable, coffee-break short without getting tedious near the end, and the bonus level is totally worth it.

Not a very challenging game, but it makes me wonder what kind of a horrible person her boyfriend is.

2. Go left, push the box down onto spikes, but do NOT walk off the end.

3. Go right and stand on button. The box will be pushed down to the boy.

1. Using the board, push the box to the right, under the small platform.

2. Jump over the small platform and use the box to get up onto the right ledge.

3. Jump over the button and small ledge to get down and get the heart in the lower right corner.

4. Jump back up to the button to lower the elevator.

5. When the elevator is all the way down, jump onto it.

6. When the elevator gets to the top jump up and to the left twice.

7. Run to the left and jump at the edge to get the last heart.
Drop down and join the girl in the center.

How to get the heart near the girl on level 17? Maybe the timing works for some and not others.

"Sir, You Have Package"

Getting the heart bu the girl on 17 is tough. The timing is VERY close. Just keep trying. It took me MANY tries before I finally got it.

Couldn't get the third heart on level 17, but otherwise I got them all.

@OtherBill:
Where's the bonus level? Do you have to get all hearts for it or something?