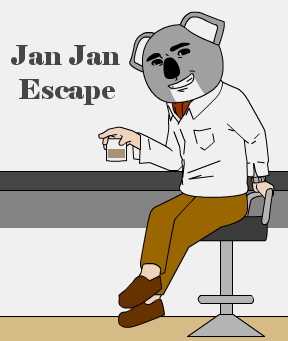 Is it a lucid dream by someone highly feverish? Is it a new escape game from Detarou? Well, why the heck can't it be both? It's JanJan Escape, and, as is standard for the genre, there are puzzles to solve and a room you must get out of. Not standard for the genre, of course, is the bed full of spaghetti, the leering koala man, the salaryman-swatting plant creature, and the duo of literal pot-heads in the wrestling onesies. Of course, they're pretty standard for Detarou.

You have to be in a certain frame of mind to enjoy the certain kind of surreality this Japanese designer brings. If you're in that frame though, there's nothing better. Be warned though: the puzzles, while having their own consistent logic, will require quite a bit of mulling over before the Eureka! moment comes along. Just remember to click everything, examine all the weird set-pieces closely, and prepare for everything. Yes, even that. In short, JanJan Escape is another installment of all the Dentarou-brand strange things we love and are confounded by. It's awesome, weird, and awesomely weird.

Bad ending: Go through the nose door at any time after opening it.

Standard ending: Follow the walkthrough above, ignoring the breakpoint.

Good ending: Follow the walkthrough above until you reach the breakpoint, and STOP THERE. Instead of using the businessman-fly on the two travelers, use it on the hole in the middle of the colored numbers. Watch the cutscene, and THEN go through the nose door.

Are you supposed to

Open the nose door? I got out without opening it

Oh, Detarou! I love these games; I never feel the usual vague guilt about peeking at the walkthroughs, because they almost always tip my WTF-meter just that bit too far for me to figure out what to do.


1) got the batteries in the bed.
2) got the note on the tv.
3) read the book, made the correct order from the last page and inserted the code into the knee of the wrestling guy, which opened the door.
4) saw the big machine in the other room and connected the information on the book, the tv, and above the koala man, so that the machine works, and a a mand with a ladder comes out
5) inserted the big machine color code in the glass panel in the 1st room and got a screwdriver hand.
6) used the screwdriver in the panel above the ladder.
7) Now what? If I use the hand in the nose door it opens, but if I go in I die. BTW: Save the game if you want to try this out for yourself.
I am trying to connect the dates on the book, plus the note on the tv, with the calendar to maybe open the grid lock in the 1st room, but I have no idea how these should connect.
Also looked into combining the colored shapes in the calendar with the numbers in the vent room, but that doesn't take me anywhere either. Suggestions?

I also got out without the nose door.

Bad ending: Go through the nose door at any time after opening it.

Standard ending: Follow the walkthrough above, ignoring the breakpoint.

Good ending: Follow the walkthrough above until you reach the breakpoint, and STOP THERE. Instead of using the businessman-fly on the two travelers, use it on the hole in the middle of the colored numbers. Watch the cutscene, and THEN go through the nose door.

@SonicLover note for your walkthrough

Once you have used the first fly on the sleepers you can go back and get another.

Sorry to be the one to point this out, but... are you aware that the doll isn't a doll at all, aren't you?

@Tracian: Well, what IS it?

the solution to the heart puzzle? i don't understand.

Take the Clue turn it upside down and ignore the line with the one in it.

You should end up with

I took a screen shot but not sure on posting the link here.

Had to use the walkthrough to get started, but it was sweet revenge watching that verdammt panda get hoist by his own petard!

Even with walkthrough, the heart puzzle doesn't make sense...

hmm, are you saying that it's a, ahem,

(hey, guys, what happened to peter?)

upside down and mirror image flipped

@lavamuffin
Of course it is. But how you can guess that?

First I thought maybe it's a folded foil (two 1 look like 4).
Later I match 1 from the foil to the calendar. But I couldn't guess the connection of 4 from the lock with the calendar. Orientation and position of the 4 are confusing.

Looks like an escape game designer was watching Executive Koala! (Seriously, I own a copy of this total strangeness.)

No save for me. When I restart the game, the load game button still gray.

I love the face the other kettle makes xD