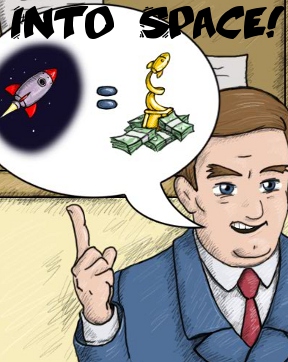 If anything, IntoSpace!, Barbarian Games' latest entry into the launch action genre, shows that while the future of the NASA Space Shuttle program may be in question, at least the Casual Game Space Administration has reached a critical stage in its evolution. After years of launching penguins, hedgehogs, and the occasional Japanese Schoolboy into the stratosphere, Casual Game technology has finally advanced enough to attempt send a bona fide gray-haired science guy bang zoom straight to the moon. Godspeed, gray-haired science guy. Godspeed.

The gameplay of Into Space! will be quite recognizable to anyone who has experienced other flash game excursions ad astra. Using your mouse to control your direction, or the [left] and [right] arrow keys, you fly through the air ever higher picking up cash, extra gas, and repair kits, while avoiding lightning strikes, airplane, UFOs and other hazards. The occasional flying gate will give you an extra burst of speed, but watch out for going too fast: hitting too many objects at too quick a velocity will cause your rocket to destruct right there and then. You are awarded cash for meeting various checkpoints and objectives, which you can then use after each to upgrade various attributes of your rocket. These upgrades include boosters, which give you a short burst of extra speed with a click of the mouse or a tap of the [up] key. Get to an altitude of 300k feet and glory is yours!

Analysis: Overall, IntoSpace! feels like a bit of a clone of previous launches, but adds enough wrinkles to keep the game interesting. I particularly enjoyed the increased steering you have over your rocket, right from the initial blast. When I played other launch games that featured a slingshot launcher or some sort of power/direction meter, it often felt like much of the game was up to fate, and only after purchasing a number of upgrades was the action put back in my hands. Certainly in IntoSpace! the upgrades are important, and you won't beat the game without them, but it never felt like I was waiting around to stockpile enough cash to wrest control of the experience from random chance. 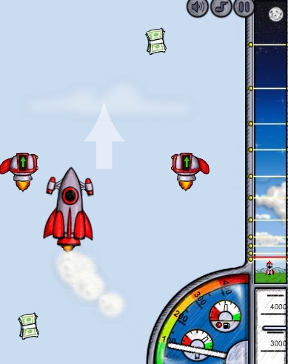 Another aspect I liked was the plethora of obstacles in the sky, though maybe not for the reasons you might expect. Avoiding the myriad of hot-air balloons and Sputniks is equal parts challenging and frustrating. There were a few times that curses were released under my breath when it looked like I was about to reach the cash a new checkpoint, but instead was zapped by a random lightning cloud. Compounding this was how even a fully upgraded rocket, in the words of Ford Prefect, "Looks like a fish, moves like a fish, steers like a cow." However, the glorious upside to this is how, when you finally run out of fuel, you are so likely to crash into something on the way back to earth, that is unlikely you'll have to wait through the entire trip all the way down. This has been a problem in similar games, when thirty seconds of helplessness is an eternity in a casual game. The pace of the game is much improved by it.

I have mixed feelings about the upgrade system. I really liked the aesthetics at play, especially how upgrading a part would impressively change the rocket's design. Seeing it evolve from a skinny bottle-rocket to an impressive spacecraft as I traveled higher and higher, really made it feel like I was making progress. The same is not quite as true for the mechanics of the system, however... some purchases really didn't seem to upgrade all that much, and some were clearly so much more useful than others. You'll want to purchase larger fuel tanks as quickly as possible, and grab every gas can that you see. The system gets the job done, certainly, but it was disappointing to spend a ton of in-game cash for what seemed to be limited improvement.

The biggest flaw of IntoSpace! is that while it changes quite a few aspects of other launch games, there was really little that felt all that new. This is not a fatal flaw: after all, once shouldn't fix that which isn't broken. The detailed colored-pencil tinged graphics and laid-back soundtrack make for a fine coat of gloss on a solid craft. Minor details like clouds changing from Cumulus to Cirrus as you head higher, and the camera zooming out from your rocket as it it were becoming a speck in the sky, clearly shows that quite a bit of care went into the creation of the game. I just kind of wish that care went into an experience that didn't feel so familiar. Still, IntoSpace! is a solid game that fans will find enjoyable from lift-off to moon-landing. The countdown awaits!

So.. the review speaks of obstacles and stuff, but all I seem to be able to do is rise 100 feet up, lose my fuel and fall like a rock.

What am I doing wrong?

Notice how much money you have after that first abortive attempt? What upgrade Costs exactly 270 BuckZillas?

One thing I discovered only at the very end (not really a spoiler, but in the interests of caution):

You don't have to buy each stage of each upgrade. If you have the money, you could buy level 5 engines without buying levels 2-4.

Huh, this reminds me a lot of Fly Hard. Wait, is this the sequel? The art style and gameplay are suspiciously similar...

gah... I got every single upgrade and STILL wasn't able to get completely into space. I would fall just inches from the top of the checkpoint bar to the right.

There's...well, not exactly a cheat, but definitely an exploit for this one. If you go through one of the acceleration gates, cut your main engines, and as you fall back trigger your booster rockets to slow you down, you can get yourself into a situation where you're balanced, bouncing up and down on top of the gate. You can use the booster rockets to keep yourself from drifting too far from either side. This allows you to get the "Duration" achievements long before you are supposed to, thus getting about $8000 to spend early in the game. This will shorten your game tremendously: before I found this exploit, my personal best was 14 days, and now it's 8.