NEW VERSION UPLOADED 2014-04-24 with a new drag and drop mechanism which should not affect other tiles during the moves.
Francis Davidson Paul knows you're a discerning sort when it comes to puzzle games. One only has to look at your multiple monocles, spats, and Instagram account of all your food to know you demand games that are smoother. Sleeker. Swankier. That's why Interactive Puzzle is such a pleasure to play. Despite its simple and somewhat familiar concept, its gorgeous presentation and easy drag and drop mechanics make it the perfect break style game. In each stage (with levels available in easy, medium, and hard flavour) the goal is to recreate the animated image by dragging and dropping tiles in the correct order. The catch is most images have some sort of element that responds to your cursor, allowing you to use it to help determine where tiles should sit. You can click "preview" at any time to see the way the image is supposed to look, and you have ten hints for the entire game that, when spent, will mark whatever tile you're supposed to place from left to right, top to bottom, in first place, second, and so forth. 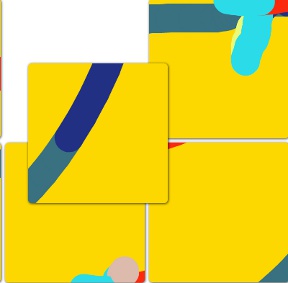 The main frustration you might have while playing is that dragging tiles around the field disrupts the order of the ones you've placed, which makes one wonder if a simple "tap two tiles to swap" mechanic might not have been tidier. There hints also feel oddly restrictive, though the game is so short it doesn't really matter. While some levels are simple animations of birds, kites, and so forth, you also have things like a stage that literally paints behind you as you move from two different points, cars that react to your cursor in ways that allow you to use their tracks as clues, and so forth. It makes you wish the game were longer to showcase even more of those clever little concepts, or that the increase in difficulty meant more elaborate levels. It's practically begging for a bigger, more elaborate installment in the future, since its developer clearly has a lot of interesting ideas for crafting really fun stages. In the meantime, however, Interactive Puzzle may borrow mechanics and ideas we've seen before, but its beautiful presentation and dynamic levels make this one we hope we see more from in the future.

I very much dislike the mechanism for moving tiles. If I have positioned a bunch of tiles in the middle correctly, and then need to swap some from the outside, the snaking motion as the tiles move screws everything up, and in ways that are too quick to easily follow. There is a reason there are two primary mechanisms for this in games: swap adjacent and swap any. Those two are easy to follow. This one isn't. And led to, well, not quite a rage-quit, but certainly a very annoyed-quit.

I suppose its up to the gamer to decide if it matters for him/her. For me it does and it feels quite annoying.

Pretty cool. But yeah ... it's too easy to move the ones you don't intend to. Then you have to start over, it feels like.

Agreed! I *love* these moving jigsaw puzzles, but the control scheme is making things so much more difficult than it needs to be. It's way too easy to destroy hours (OK, minutes) of hard work when one tile at the edge needs to get into the middle.

The ideas in it sound great, and I'd love a "swap tiles" version of this...I can't play this one because this system is too frustrating.

OK, I came up with a strategy that might help...work from right to left. Get the two rightmost columns correct, then move to the next two (meaning don't move the ones already in place), and so on. This seems to help a lot.

I agree with the others, I don't like the fact that moving a tile disturbs everything in its path. After 3 puzzles I've had enough.

One could argue that it's a "feature" that adds difficulty to the game. Which is fair if that was the intent, but in my opinion it makes the game less enjoyable.

I agree with the opinions above. I expect to swap two tiles when I pick up and drag. Instead I had to redo things over and over because of this "feature." Low stars from me.

I agree with the others: the fact that moving one tile affects the others is somewhat confusing.

Francis Davidson, the developer, checked your comments and made a new version with a new drag and drop mechanism which should not affect other tiles during the moves.
Can you please share your feedbacks about this new version?

I didn't play the version with the apparently frustrating controls, but I did play this version.

Very confusing and disorienting at first, but once you get the hang of it it's a nice little fun but mildly challenging task. Enjoyed it quite a bit.

I must be the only one that actually liked the original sliding mechanic :) I felt the initial frustration others mention, but once I got a hang of the how it worked, it's predictable, and I feel it added a layer of depth to the game. Something like a sliding-15 puzzle flavor, kind of.

As argyblarg said, if you intentionally solve in an order such that you never have to move through the placed tiles, it makes it much easier (starting in a corner is best).

Most levels interactions make it fairly simple to find a corner tile right away, but even when I started in the middle (the Kaleidoscope), by that point I understood how the tile shuffling worked well enough that I could swap a tile from the far left to the far right and easily enough restore the tiles in the middle. Turns out, there is(was) actually a way to swap directly opposite tiles on two edges and leave the tiles in between unchanged! Discovering tricks like is an example of the depth I feel the sliding mechanism adds.

I had not yet played Hard mode, but I hope the original mechanism is still an option when I do.

ok thanks Solatoral & Bryan.
I gonna ask to the dev for adding as an option, the new mechanism.

Thanks ... this is much better!

Much better! Thanks to the developer!

I'm obviously in the minority (at least among commentators here), so don't add the option just to suit me, but wow the entire game play is now fundamentally changed.

That simple change has transformed it into an entirely different game.

Before, the game took foresight and planning and some amount of logic to place everything correctly.

Apparently most people prefer the new game, so I must be in the minority that prefers challenging puzzles.

*New version uploaded*
You can now choose between 'Swap' or 'Slide'

No problem Bryan, I'm sure many are like you, preferring hard challenges so the new version should fit the expectations of people.

Yay! Thanks Jeff and thanks Francis.

By the way, the secret to moving tiles across the board without disrupting the tiles in between...

It only works if you move tiles in a straight line, not diagonally.

Think about castling in chess.

You see the trick now?

X is swapped with Y, the tiles in between are unchanged.

This basic principle can be used to move a tile from anywhere to where ever you want without disrupting tiles in between, as long as you move tiles along a straight line (no diagonals).

3,683 Views
2 Comments
chrpa— Jayisgames needs your help to continue providing quality content. Click for details Forgotten Hill is a strange place, but most of all, a dangerous one, especially for servants. Archibald could tell you things - and he does in this...  ...