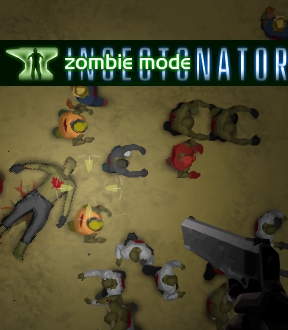 A couple of months ago, we featured Insectonator by Denis Kukushkin and family. I thought it was a fine shooter, and going by the site ratings, it seems that many agreed. However, I did have a small problem with it: as fun as it was to blast various anthropods into lymphatic chunks, the whole thing did seem just a shade cruel. I mean, most of those scarab beetles were just minding their own business. If only the developers came out with a version that featured enemies for which the average gamer had no compunctions eviscerating... something like, oh, I don't know, the stalking legions of the undead. Well, guess what, Insectonator: Zombie Mode is here, and with it comes new weapons, new arenas and new achievements. And zombies. Tiny, tiny zombies.

As I like to say with many an expansion pack, unbroken gameplay isn't fixed: Using the mouse, you take aim and blast zombies, starting with darts, then moving on to knives, fire-arms and others. You may also use the [arrow] keys for more pinpoint accuracy. Weapons can be switched with a a click of the mouse, the [Z], [X] and [C] keys, or by setting the options to switch randomly after a clip has been unloaded. Bonus points are awarded for quick kills, head-shots, and consistent accuracy. Some zombies require an extra bullet to destroy the corpse. Between each round There are four basic types of selectable gameplay rounds: ones where you must clear the area of all zombies, ones where you have to shoot a certain amount of specific varieties, ones where you must shoot certain zombies in a certain order, and one where you must protect your rubies from being dragged away.... Zombies love rubies. Over time, various conditions will be met and new and crazier weapons will be unlocked.

Whether you were a big fan first Insectonator or not, there is enough overall new content for this to be worth playing. I can't pretend that I don't see the inclusion of zombies as a little bit of blatant meme-pandering, but the graphics and atmosphere make it work. After all, you have a lot of options in the "killing zombies with various weapons" genre, so you might as well go with the one that lets you chuck anvils at them. The main complaints of the previous installment have been addressed (especially the lack of autosave), so what are you waiting for? There are skulls to be cracked.

Someone please help!! how do i get the "Just do it" achievement?

Got everything except the "Zombieball" achievement. Any hints?

Drop a nuke, then shoot it.

I think you can do the Bullseyes. It's the most easiest.
for the 4 remainings.

zombieball use basketball
and the others>> use nuke then ......... to explode it.

I've only worked out 'Armageddon', detonating a Nuke with a Pipe bomb.

I got all of the 100% achievements, and then got all but one of the second wave but I can't figure out how to get the final Fast Kill award in order to score 132%.

I've tried using pistols in Killer mode to carpet the entire arena with bodies until no more zombies are walking, and then blitz the lot with the minigun. Still, I can only get into the 80s at best before the ammo is depleted. Nukes don't seem to create Fast Kills. Any ideas?

How to get "Just do it":
Suicide: Nuke + Lightning
Armageddon: Nuke + something explosiv
Bullseye: Shoot a dart in the dart-board-level in the middle
Zombieball: Get in rage with the ball
Fly Anvil: Nuke + Anvil

Working on "Just do it" achievement. Only have two so far:

How do you make an anvil fly?

Detonate a nuke with it!

Detonate a nuke with any explosive.

(Or by dropping it on grenade-wielding zombie).

Hit a nuke with lightning!

On the level with the "dartboard" background,
hit a bullseye with a dart.

Get in rage with the ball.

One thing I liked about this version of the game was the various shoutouts to other online games -- the Armor Games Sword, "Don't Touch My Gems" mode, some others.

The "Suicide" bit was present in the original Insectonator as well; I accidentally came across it when on "choose a random new weapon mode" (the easiest mode for using nukes). I notice that in the new version, melee weapons other than the anvil won't trigger a nuke, you have to shoot it.

@JIGuest: I think the "Crank it" achievement in the later game is probably the hardest achievement to get -- but not impossible. It is impossible to get in any level where the zombies are just milling about. I got it by playing in "Don't Touch My Gems" mode, using a bazooka to nudge the inital three gems into a single pile, so that all the zombies would be moving towards one point, and then firing into the crowds as fast as I could with the minigun.

how to get ninja medal ? when i'm doing sword combo a cutscene pops up

How exactly do you get into "rage"?

Gone In 30 Seconds has me stumped - there's no mode in which the zombies come fast enough. Any tips?

Go nuts! Wait for the screen to get nice and crowded and try your darndest to empty it in the shortest amount of time possible.

Gee - turns out I was focusing on the wrong point all along...

To beat the game in 30 seconds achievement

Go to Selectioner mode and use the nuke 2 or 3 times and you are done.

How do you get the Railgunshot award

how do you get the toss the boss?

Crank it is easy to get if you do this:
in don't touch my gem mode, begin with the minigun, and just kill the zombies when they are on one of your gems. when there will be a crowd of zombies around, fire a lot with the minigun, and when you get to 50 fast kill, switch to the browing machinegun by pressing "x", and finish the job.

just do it is easy,
suicide: nuke then lightning
zombieball: get more than a multikill with the ball
bullseye: reach the middle of the target with the dart in selectionner mode
armagedon: nuke then any fireweapon
flying anvil: nuke then anvil

for the railgun shot, you have to kill at least 7 zombies without nades, rocket launcher or nuke in a single shot. best way is the shotgun i think

no matter how many times i click on selectionator mode, i never get the dartboard background, how do i get it?

there is a easier way to get get the acheivement zombieball for just do it . You have get a hole bunch of bosses hit them with the ball until they are laying on the ground the you kill them all

my fave weapon is the armor sword

how do you do the killer