Shaun says that contrary to what recent pop culture would have us believe, zombies are in fact quite slow, but apparently the undead horde you're controlling in Toge Productions' arcade game Infectonator Hot Chase never got that memo as they have quite a bit of pep in their step. To play, all you do is click and hold on the screen to make your zombie move vertically up the lanes, and release to make it drop back down. This allows you to chow down on any humans you come across, which nets you cash for upgrades and increases the size of your grisly horde, granting a temporary boost of speed, as well as helping you dodge hazards like cars and bullets. Once your health runs out, you'll be forced to start all over again, and health can only be regained by eating humans or other power-ups, which can transform you into powerful mutations temporarily. 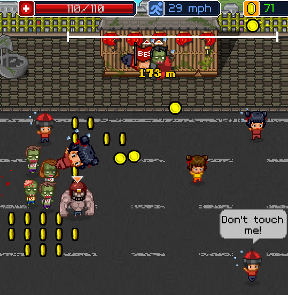 Make no mistake... Infectonator Hot Chase is as grindy as it is cute, and for a game about a tidal wave of zombies chowing its way through humanity, it is very very cute with its pixellated style. It's designed to be played over and over, forcing you to grind cash for upgrades to make it farther, and it's a fine line between addictive and annoying when the costs are so high and you have to start all over from the beginning if you don't want to shell out money when you die. Still, there's a lot of power-ups and mutations to find to keep things fresh, and the simple gameplay is the sort of thing that echos the easy yet fun playability of arcade classics. Want to control the end of the world with just one finger? Infectonator Hot Chase is the breezy, goofy answer.

The controls are a bit annoying. It'd be better with keyboard controls for up/down/boost without the constant gravitation towards the bottom of the screen.

A bit disappointed, could have been much better with some tweaks.

The missions are really hard and luck based, and the rewards are too low. 1 missions will give me 1000 coins when I get 10k per run on average.

A couple of mutations do mostly nothing and wear off as soon as you hit someting, which is usually right away.

I really have no clue how the revive cost is counted.

The slow-motion at gates is more distracting than cool.

Overall good, not great, will not finish.

I didn't finish it either. Even using Psy and upping the Pickpocket skill, it takes too long to earn money to progress. It's a casual game paced uncasually.

Revive costs are the meters into the game you are when you die in a simple 1:1 ratio to gold necessary to revive you.

@Tenzhi it's because the game is clearly based on a Jetpack Joyride game scheme.

I also think that's why it's not such a casual gaming game in that sense @john.c.jocelyn. It's more for the mobile time killer game demographic

Not a bad game. although there are some questionable UI choices:

Having to use the mouse button both for movement and to activate the boost means you have to look away from the field of play to click on the boost.

A big red "Give Up" button in the middle of the pause menu, and a small gray "

And what's the deal with games where you have to start playing a level and then pause in order to turn the sound on or off? Please make it possible to adjust the sound at all times!

Anyway, I'm having fun with it.

Oh, and an interesting glitch; it's possible to get the game playing in the background behind the pause menu! :)