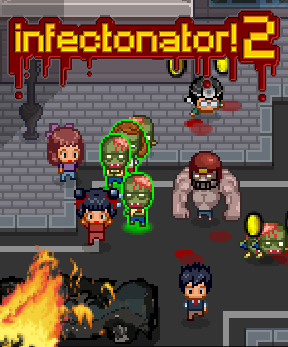 Nail some boards across the door, pick up your cricket bat, and get ready to face off once more with the scurrying dead. It's Infectonator 2 by Toge Productions. The latest in the popular series of zombie action-strategy games, Infectonator 2 thrives on frenetic chain-reactions, awesome sprite art, and the pure adrenaline rush of infecting the world, continent by continent. It may be mindless fun, but that just means you can keep going even after your brain's been chomped on. Also available for iOS and Android!

Infectonator 2 is controlled with the mouse, though keyboard hot keys for various actions are available. First, on the world map, you select the city to wish to attack and are taken to an overhead view. The goal is to kill or zombify a certain amount of the population in each city. Clicking a location in the city will release a wave of the virus that will infect nearby humans and turn them into zombies. These zombies will then attack nearby humans before collapsing. A certain percentage of humans bitten will become zombies themselves, but watch out: some humans will fight back. A killed or converted human will release coins, collected by mousing over them. Extra coins can also be earned by completing different level objectives, or by completely destroying the population of a city. Coins are then used to purchase various upgrades: longer life, damage resistance, a higher chance of infection, a wider spread of the initial virus and so forth. Also available for purchase are weapons like grenades and land mines which will aid in the melee. In some cities will be special humans that, when defeated, will unlock a new type of special-attack zombie that can be used once per level. The game isn't over until the whole world has fallen to your legions of the undead. 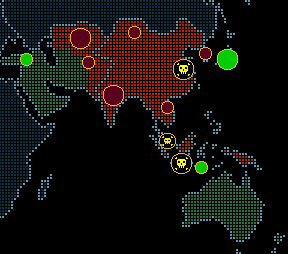 Analysis: The previous releases in the Infectonator series were solid, but hampered by stereotyped character design that weren't funny enough not to be offensive. In Infectonator 2, however, the developers make the wise choice to present the same general selection of human sprites in each level. Indeed, the new research Toge Productions has done into their locales makes for some hilariously informative level descriptions and some killer background art. Of course, it might be argued that putting in such geographical detail is unnecessary in a game where you can call up a zombie Ronald McDonald to take on Justin Beiber, but it does make for a stronger work. After all, the streets of Rio should look different to those of Moscow. All that's missing is a little Carmen Zombiego. Another nice touch is the different languages the humans' dialogue comes in. Yeah, it's the same collection of chatter put through Google Translate, but if you're set on making "arrow to the knee" jokes, you might as well do it in Farsi.

Gameplay-wise, Infectonator 2 maintains the fun of its predecessors, while adding new features, achievements and upgrades. Particularly cool is the selection of barely-not-copyright-infringing special zombies you can place in the levels. This adds another layer of strategy, and is particularly useful for when there's only one puny human running around behind a dumpster on the other side of the map. Certainly, it can get grindy, and some of the mechanics should definitely have been streamlined... you'll end up going to the lab/store much more often than you probably will want, simply because of poor button placement. Still, Infectonator 2 has a surprising amount of depth.

Infectonator 2 doesn't feel so much a sequel as a leap to a new console: the A Link to the Past to the original's Legend of Zelda. The graphics are cleaner, the jokes are funnier, and as the map screen slowly turns from green to red, you can't help but release your evil laugh. If your computer can handle the madness of the 200+ creatures in the later levels, Infectonator 2 is a world tour you'll be happy to take.

Still can't infect Madagascar.... because it's not available. Haha.

I'm highly disappointed that I can't go sandbox on these cities. Once I achieve an objective, they're off the board (until the end, when everything's unlocked at a higher difficulty level). So that means I could have 20-30 seconds on a city, achieve all the objectives, and then never see it again.

So, is it possible to get all objectives on Game+ mode? I have two cities left where I have a "no support" objective (Base 2 and Eskimo city) and have bought all possible upgrades. I cannot seem to even put a dent in these cities without using support. It's possible there's some configuration of special zombie dudes that can win, but I haven't found it. Has anyone else?

...I am, by the way, highly enjoying the game. I've obviously put a lot of time into it. I'm just curious whether it's possible to "win" or not. :)

@Parmeisan The specialized zombies don't count as Support. Deploy them wisely, maybe even a few seconds after the initial infection.

RAAAAAAMBOOOOOO! D8
Oh man, another infectonator game! Is it my birthday or something? I love this game so much! I've played through every version on Newgrounds! And what's that? I can have it on my phone? For only $1 you say? :D
Sign me up! I've got a lab full of mad scientists and reanimators at my beck and call! Let's take over the world one city at a time. No survivors!! XD

It's also *really* annoying in the later difficulties that the most strategic points are under the menu buttons! Half the humans are barely shown on the screen a third of the way through. I can't waste precious half-seconds because I can't place a supporting trap in a certain place. Just splatter the goo on the fire hydrant or whatever.

Unless there's a way to toggle the menus off, this is a major design flaw. Either take them off or don't make those areas playable.

Wow after playing this game for 5 hours i conquered the whole world. Do you guys know if there is a third version of the game besides Infectonator World Dominator and Infectonator 2?