Indigo Lake is a first person horror adventure created by 3 Cubes Research. You play the role of a paranormal investigator sent to check into the disappearance of Dr. Everett in an abandoned lake resort. Creepy, right? Armed with a simple pistol and a looming sense of fear, you'll explore a surprisingly large world stocked with mysteries and puzzles around every deeply shadowed corner. 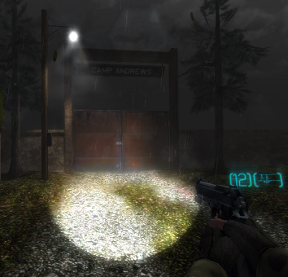 Indigo Lake's controls are fairly standard for a free-roaming first person mobile game. Use the left side of the screen to move, the right side to look around, and tap the screen to fire your weapon or take a closer look at certain objects. You're equipped with a spiffy headset that shows information about certain things in real-time, which is useful but it won't answer the more pressing questions like "what's up with that air piano?" or "why do those posts have numbers on them?" Rotating your device brings up the menu and objectives.

First person games haven't really found their footing with touch controls, but since Indigo Lake isn't about action, you'll find them good enough to get the job done. Indigo Lake is an exploration game first and a psychological horror game second. There's shooting, yes, but it's survival-based, not kill all the things-based. Puzzles are rather intelligent, if predictable, and the lighting and graphical effects really set the mood. Indigo Lake might not reinvent the horror game, but it's a respectable representative of the genre in an ecosystem that could use a lot more games of this nature.