Mass, propulsion, physics and gravitational pull... it sounds like the start of a nerdy "yo mamma" joke, but it's actually Impulse, from EdGE (The Educational Gaming Environments group) and GameGurus. All you need to do to play is to click. You goal is to get the green ball safely into ye olde mystical portal in each stage in succession, but standing in your way are other coloured balls, and colliding with them means game over, forcing you to begin the level anew. Whenever you click, however, you generate a pulse of energy that moves everything around it fast or slow depending on where it was in relation to your click, and allows you to clear paths or send your green ball along its way. Each click uses up five percent of your energy, however, and if you use it all up before you reach the portal, you'll have to start again. 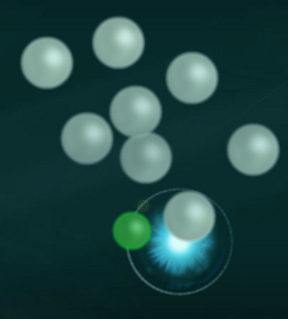 But hey, a little patient clicking and timing and you're golden, right? Well, not quite. See, as the game progresses, so do the number and variety of obstacles you have to contend with. The huge white balls that draw you in with their gravitational field, for instance, or colours with different charges that will repel and attract others, making the playing field a bit more like a minefield. The game is designed around Newton's Laws of Motion, but you don't need to panic if you slept through that particular chapter in school. You do, however, have to be the sort of player for whom patience comes as naturally as reflexes, and observation is just as important if you want to make it through the game's beefy seventy levels. It's not just about blindly blasting your way through each area, it's about making use of each object's unique properties in a way that fits with your strategy of not being blown up... which is a pretty important strategy to have. Just remember... you can use your pulse to move and otherwise impact "enemy" balls as well, which can help you clear a path and manipulate the screen.

The frustrating thing, however, is that only saves your level progression when you pass a checkpoint that introduces a new element, and movement does not reset unless you're destroyed. What this means is that if your ball was zipping through the portal like a rocket, there's a very good chance it's going to rebound off the wall or just run straight into another ball that spawns as part of the next stage, forcing a game over and a potential table flip. For some players who might otherwise enjoy the clever implementation of physics, it might be a bit too unforgiving and finicky as a result. Especially in later levels, where the sheer number of balls (stop that snickering) onscreen combined with the variety of different rules affecting them at that point make for an absolutely harrowing experience already.

In a lot of ways, Impulse (no relation, ironically) is a simple game. The controls are as basic as you can get, and the objective never varies. Instead, the game focuses on the introduction of new elements and forces in a way that continually makes you adapt to an ever-fluctuating set of rules. As an added challenge, though the concepts of each level remain the same (number and type of balls stop laughing you philistine), the placement of balls and the portal is always randomised. Relaxing? Ahahahaha... no, despite the lovely style and mellow atmosphere. But certainly deeper than your average avoidance/physics puzzle game by far.

It's just a stripped down Osmos from what I see. Osmos is MUCH better.