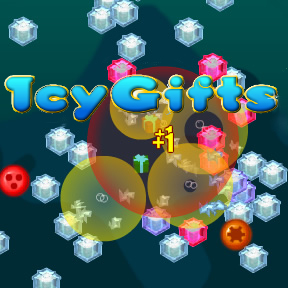 Let's clear the air here: I love chain reactions. I love upgrades. Put them together in a game and I'll go as mad for it as I do for Reese's cups. Producer Silengames has done just that in the Boomshine style Icy Gifts that, though not particularly hard-hitting, has plenty of gameplay and variety to satisfy that itch. Icy Gifts has you freeing frozen presents using chain reaction explosions. Apparently they're underwater too. And the sun comes out when you win. Look, I don't get it either, but the story isn't important. The "BOOM" is.

Icy Gifts provides enough originality to stay fresh. Along with the normal exploding presents, special spheres explode to leave poison gas, shoot bullets or lightning, cause tidal waves, or give you an extra click. The spheres can be upgraded by using the thawed presents you collect as currency. The game throws both different exploders and level sizes at you too. You'll see 4 presents one level, 100 the next, and then 40 poison gas spheres after that. Every level has an initial goal, and then two more goals beyond it for two or three star ratings. Passing a level is easy, but you might find yourself repeating certain levels more than others for that 100% three star rating. There are also 45 achievements to go after, though some of them are easier than others.

Icy Gifts doesn't have a huge challenge or innovate in the genre, but it is a solid package. The visuals are slick and the soundtrack is pleasant. There's enough variety and objectives to keep a completionist busy and a causal gamer entertained. Consider this a late Christmas present.

I can't play the game because it is off-center in the webpage it loads on! You can see only part of the game.

That was a blast! Cool game.

I had that issue myself in Chrome. It went away after I reloaded the page. Make sure you don't tab out while the game is loading; remain in the game tab until the main screen pops up.

Pretty easy but lots of fun making stuff go boom :) Upgrades and achievements made the completionist in me squeal with delight.

What a blissful game! It should have been released a month and 9 days earlier. :) My only complaint is that it's short, way too short.

Off-center in IE9 and Google Chrome for me. All of the intro banners are OK, then the game is wrong.

[I can't reproduce the issue in IE or Chrome. Try reloading the page. -Jay]

I got it to come up in the center the second time I loaded it in IE. However - a "New Game" option would be nice - I took a while to figure some stuff out, and I would like to start over. Even after clearing all caches, I still have the game as finished, including upgrades.

Same issue with it loading off center in IE8. Hit F5 and it refreshed properly.

For the people getting off-center play:

Try right-clicking the link and selecting "Open in New Tab", rather than the default action (which, in Chrome at least, is a new window).

If this doesn't fix it, refreshing the page (with F5) should do the trick.

Woot! I like the gifts, the gifts that go Boom! I do agree, though, a "New Game" button would be best, otherwise there's really no replay value. And I was into the idea of replaying it.. :(

Off-center in Firefox 3.0.5 and IE7 (on Vista). Tried refreshing, not tabbing out, opening in new window and new tab.

Vitaliy of Silengames is looking into the loading issue. Sorry for the trouble.

If it doesn't load correctly for you, check back tomorrow, hopefully there will be a fix for it.

[Update: I believe the issue has been fixed. Vitaliy sent a new version that's uploaded and online now. -Jay]

Does anyone know how to get three stars in level 16? Only one click for 20 Icy Floe... And no Additional Click...

Nevermind, I just did it... Finally got all achievements!
Very good game by the way. Really fun!

Aw, I wish there were more upgrades. I wanted to earn the final achievement by having a gigantic click ratio and everlasting acid, not just finally get it by luck.