In Louissi's real-time strategy simulation game House of Wolves, you're responsible for establishing and protecting your own bloodline by building a thriving settlement from humble beginnings that can stand against the forces of darkness. (Actually, it says, "his bloodline", but the joke's totally on them because I made this goatee out of black felt and totally snuck past the game's dude-dar, which is a radar to check for dudes.) Though you begin with only a single watchtower and one lone settler, the tutorial will walk you through the basics of building. Everything is done by ordering your people around, and you can click on them to open their menu for building or attacking, and then right-click anywhere to make them head to that location, selecting multiple people by dragging your cursor to form a box around them. Send settlers to gather resources like food and building materials, and train and recruit warriors and archers to defend your land from hostile forces. 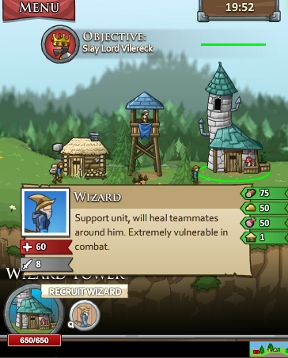 Lacking any sort of fast-forward option, House of Wolves is a game best suited for players that don't mind everything happening in due time. Much of your time will be spent waiting for things to be built, or for enough resources to be gathered/generated to build them, and since your interaction primarily consists of ordering people around, it can feel like a very slow-going time. The game is played on a 2D plane, restricting building to a straight line, so eventually you'll wind up with a sprawling territory that will be harder and harder to defend as the frequency and strength of enemy attacks increases. Balancing offensive with the defensive is tricky but a necessity if you want to gain access to the more powerful buildings and upgrades, so you'll need to make sure you don't spend too much time hiding within the safety of your soldiers as opposed to spreading out and exploring. House of Wolves, however, strikes a nice balance itself between simplicity and complexity to allow both casual players of the genre and diehard fans to find enough to like, especially with the difficulty options. It's a game meant for a bigger time investment than some browser titles, but Louissi's usual level of polish and style will make it worth it... provided you have the time to give.

I got stuck in the tutorial. No deer would spawn so I couldn't get past the Collect 25 food step.

Build a pig or chicken farm

Anyone got any tips to reduce the amount of time needed to clear the game? I thought my score of 56 mins was pretty good, until I saw the all time scores... 20 mins! I find that almost insane...

I must be really bad at this game b/c I feel like it goes on forever. The last time I played it it had to be hours, and I was no where close to being done.

Is the secret to constantly zerg?

I did it in about 30 min. Basically set a lot of huts with about 5 people on food and 7-8 on wood, that should allow you to create as many archers and pikemen as you need to slowly advance.

Once you get to iron and rock, set more huts to harvest all that and build a big army, keep spamming archers and pikemen as needed. I had population of around 120 when I finished it.

I also had a fairly short time, it's easier once you escape the tutorial.

Extremely lovely simulation of battle tactics and tiny people hitting each other... with none of the control. Would be vastly improved with better selection, unit control, "camera" control, map navigation, etc. The nasty map scroll is terrible for quick maneuvers, it's a waste of nicely random terrain and a mix of enemies. Upgrades were not really thought out, either, and could otherwise add a lot of dimension.

Slight bug with a full army and wizards casting speed; some units skip to one side of the screen, sometimes ending up in enemy territory. Also don't select a building that's about to be destroyed, or the game will lock.

a watchtower at just the right distance and wait for the archer to finish off the front line of enemy forces.

Overall on par with the likes of Takeover ( https://jayisgames.com/archives/2012/10/takeover.php ) Replayable if you're like me and enjoy tiny people hitting each other, and can do without a meaty challenge.