Please be aware that this game contains graphic, heavy violence, as well as sexual violence some players may find upsetting.

Hotline Miami 2: Wrong Number opens with a tutorial were you brutally slaughter everyone inside a house in the most graphic fashion possible and then assault a woman. If any part of that sentence made you wince, Devolver Digital and Dennation Games' follow-up to their 2012 ultra-violent, ultra-challenging indie action game probably isn't for you. That the whole scene turns out to be part of a movie's filming doesn't necessarily lessen the blow when the rest of the game is every bit as gut-wrenchingly gory, with all of it wrought by your own hands. In every level you're bashing, blasting, slicing, or otherwise decimating your way through places filled with people armed to the teeth, and even a single hit will take you down, forcing you to move fast and react faster. Kick the door down to knock the man behind it to the floor, grab his gun and blow away his partner and the reinforcements who come bursting in while dodging to the side to avoid the gunfire through the windows and then take out the first guy before he gets to his feet and comes after you. Fail, and you'll have to try, try again, and all of it happens in the space of a breath. It's fast, stressful, and, yes, incredibly, lavishly, unstoppably violent, but it's packaged around a challenging and rewarding combat system, and one of the trippiest stories, soundtracks, and visual styles you could ever encounter. Despite significantly increasing the premise and complexity of its story as you play multiple different characters over the course of the game, a significantly more structured approach to the way levels are designed removes enough of the need for quick-thinking versatility to make the game something more of an action-based puzzler... with levels of violence that might make Tarantino raise an eyebrow. Largely, Wrong Number plays the same as its predecessor. [WASD] or the [arrow] keys to move, with the mouse to aim and attack (right-click throws your weapon or picks up another), and [spacebar] to attack downed enemies. Each act will usually be broken up into areas, with a checkpoint at the start of each, and you'll need to clear all the enemies off of a floor before you can move on. At your disposal are firearms, baseball bats, chains, knives, swords, crowbars, and more, all of which you can grab if you grab them from a downed foe. Enemies will attack if they can see you, so how you go about remaining alive when you're outnumbered and outgunned as a single hit will often take you down is crucial... do you kick open the door to temporarily daze an enemy and hope you have enough time to grab his weapon and go after his partner before they pull the trigger? Do you hang back and fire a blast that will bring enemies running so you can pick them off as the rush around the corner? Do you peep into a room to lure people to race after you so you can kick the door in their face? Where the original Hotline Miami offered a significant amount of fly-by-the-seat-of-your-pants action that forced you to think on your feet, however, Wrong Number is a lot more structured in a way that encourages thinking of each level like a puzzle. It's actually a bit of a strange shift, and one that means Hotline Miami 2 doesn't have quite the same spirit of breathless, free-wheeling action. When you know exactly what's going to happen after a few tries, it starts becoming routine... hang back, fire gun to bring three enemies running down the hall, grab the weapon one drops, kick open the left door and blast the enemy in there while backing out of the range of the men on the other side of the windows... you get the idea. 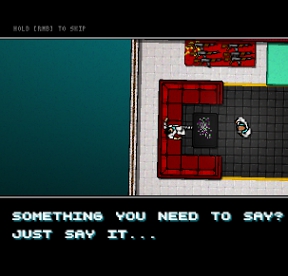 A lot has already been said about Hotline Miami 2's decision to include sexual violence (albeit a single scene with an option to disable), but really the main thing is that it feels odd and pointless, adding a level of peversion and meanness that likely very few people would argue was missing from a game already rife with graphic brutality in cringingly creative ways. Likewise, the hugely developed presence of a story just feels sort of cumbersome, both because part of the original's appeal was that so much was implied more than stated, and because the way the story here skips through so many different times, locations, and characters and motivations, it's awkward to follow and remain invested. That said, the way different characters have different restrictions to their abilities when you play them, such as a character who will only disable his enemies and never use a lethal weapon, bring a lot of challenge through variety as you're supposed to adapt your playstyle to fit.

Some chapters are definitely more enjoyable than others, as occasionally the game strays too far from its fast-paced roots and bogs you down with stealth, but it's admirable that the developers have worked so hard to make so much of the game feel and play different. The game looks and sounds as oddly gorgeous as ever with its neon hues and discordant soundtrack, but there's just something so different about it that I needed to take time with this review to think about how I felt about the game, and why I wasn't quite as enamored as I was with its predecessor. Hotline Miami 2 is a hard game, often in very rewarding ways, but in ways that deviate from the style set by the original game. If you loved the first game, its spirit is still intact here, and hesitation will still get you killed in new and horrific ways across a huge campaign full of new locations and characters. It's just not quite the same beast it used to be, and whether that is a good thing or something that gives you pause is largely going to be a matter of personal taste.