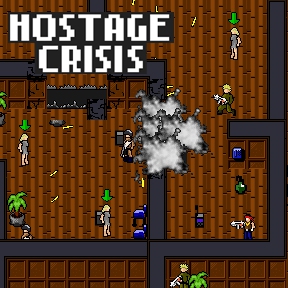 [Cue dramatic music and movie trailer voice] In a world... where you have to fight to survive... a world with destructible environments and numerous pixilated enemies... there is a crisis like none other. But one man... had one mission... to save the scantily-clad hostages... no matter what the cost! No, it's not the next Van Damme or Schwarzenegger flick... it's... Hostage Crisis! [Cue massive explosion]

This new action title (which credits its inspiration to the downloadable game "Ultra Mission") has you controlling a Rambo-like commando (complete with tiny pixilated red bandana) as you storm an office complex in an attempt to rescue numerous blonde female hostages. The [WASD] keys move your character, while the mouse aims and clicking fires your machine gun. There are also secondary weapons such as grenades, timed charges, and radio-triggered explosives that can be thrown with the [spacebar]. The object is to collect all the hostages across 14 levels before getting killed or harming the defenseless ladies. If you fail (and it will probably happen quite a bit), you can thankfully keep retrying a level until you beat it.

A nice touch to this game is its dynamic environments, which can buckle or crumble when hit by an explosion. Want to avoid a hallway teeming with dangerous bad guys? Just blow up the nearby wall with a grenade and walk around them. Uncomfortable about a group of baddies clustering in the next room? Plant a satchel charge on the wall and wipe up the mess afterwards. The only problem is that the hostages are usually in the line of fire or within the blast radius of exploding walls, so careful shot and explosive placement is vital to your success.

Hostage Crisis is a fun title in the style of Smash TV and the classic PC game Cannon Fodder. The controls are fluid, gameplay is fast, and the small retro-looking characters with their tiny detachable limbs give the game a slick (albeit cutesy-gory) look. I was pleased with the AI in the game, which will at times cause the bad guys to huddle near a hostage, making things more challenging. There's also a somewhat random element to the action on each level, making you experiment with different strategies to get past tricky sections. While the gameplay is a bit short and a few in-game ads are a bit too blatant, overall Hostage Crisis is a fun shooting romp that should satisfy your need to play hero during your coffee break.

"Sorry, we are at the "Casual Gameplay Design Competition #9", thanks for understanding."

…But that was [Yesterday]

Definitely worth playing, but I have a few complaints:

* The time bombs are useless. They almost never kill anything on the other side of the wall, and they can't be thrown on the ground like grenades or remote bombs, only attached to the wall.

* There's no way to drop the bomb you have without detonating it. If you have a grenade when you need a radio bomb, you'll have to waste it.

* The gun seems to lag a little. It will keep firing for a few seconds after I release the mouse, or take a moment to start shooting.

* This one is an actual bug, not a design complaint: I was awarded "Total Victory" after blowing up a soldier with a bomb, but the description says to use a pistol.

Other than these minor complaints, it's quite fun. It's a good mixture of action and puzzling.

I've been enjoying this game for a couple days, but I cannot seem to wipe out those dang grenade launcher guys! I shoot them and hit them with grenades and they just keep on one-shotting me.

OK this game has officially become addictive. But there aren't enough levels! Where are some new ones? Or maybe an editor?