Hero in the Ocean

Once upon a time there was a film called Yellow Submarine, considered a classical work of psychedelic animation. Also considered so thoroughly freakish that it has people (yours truly included) covering their eyes and ears every time they so much as get a whiff of it. If you're one of those traumatised souls, help yourself to a generous dose of Hero in the Ocean, a soothing, sort-of-physics puzzler starring a completely different yellow submarine. All you'll be doing is using the [arrow] or [WASD] keys to float around the deep blue sea, collect stars and pick up divers. It's much needed therapy. 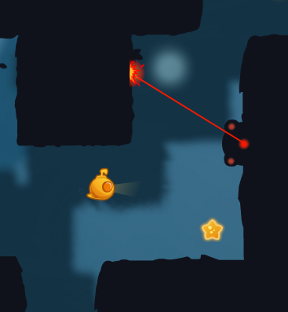 Hero in the Ocean doesn't give you much by way of story, but don't let that stop you. What matters here is the atmosphere, which is very subtle and, at the same time, very lovely. It turns out you don't need much to create a feeling of quiet serenity: just some cool, shady ocean depths, swaying seaweed and sweet, tranquil music. The basic goal is to find a diver hidden somewhere in each mazelike level and find all three stars if you're so inclined, but you can also try to locate secret areas which hold trophies or, less often, a star. The puzzles go hand in hand with the ambiance, which means they are less than difficult, though still charming, and certainly varied enough to keep you intrigued. The game will occasionally throw a guided missile or a laser beam at you, just to keep you on your toes and change the tempo a little, but Hero in the Ocean is casual through and through – cute as a button, with perfect mechanics and interesting puzzles. And not an animated Beatle in sight.

Play Hero in the Ocean

Liked it! As starchild said, it's not especially difficult, but plenty of thought clearly went into keeping it interesting. While the "physics" tag can be a turnoff for me with puzzle games, there's something just plain pleasant about the way the keyboard controls and inertia interact to put your sub right where you want it to be. (The guided missile mechanics were pretty cool, too.)

It's lovely and fun, but it needs a couple checkpoints on some of the later levels. One level has about 90% easy stuff once you figure out the puzzle, then a hard frustrating 5% section. Quite boring trying to get through.

This would be great for the first few levels of something bigger but right now it just introduces some concepts, which it doesn't re-use. I don't expect levels in the hundreds but it can be expanded quite some.

Last but not least: I found all the secrets and got all the stars but that's it. No bonus level, no wallpaper to download, not even a watery handshake. Quite anticlimatic.

Cute and fun, except for the "TA-DA" sound at the end of every level that totally doesn't fit in with the rest of the feeling.

Escape from the Dam Facility

3,047 Views
7 Comments
chrpa— Jayisgames needs your help to continue providing quality content. Click for details The latest Neat Escape's game starts like an ordinary bus tour. You arrived with a guided group to a new dam facility but during the tour you're...  ...

2,000 Views
0 Comments
chrpa— Jayisgames needs your help to continue providing quality content. Click for details Welcome to Weekday Puzzle! In Kultisti's platformer puzzler you need to jump a lot - your protagonist is caught inside a strange realm of small islands and...  ...

Getting Over Addiction to Runescape

966 Views
0 Comments
jayisgames.com— Since Runescape's release back in 2001 it has grown into an MMORPG titan amassing over 1.1 million subscribers from 2019 to 2020. The interesting part about the game's success is that most of the players in the community understand its...  ...

1,262 Views
0 Comments
jayisgames.com— Here's some trivia for you: solitaire isn't a game. Instead, it's a whole genre of games, encompassing more than 500 different variations on the same basic card-sorting theme....  ...