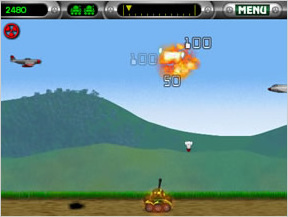 Heavy Weapon is a side-scrolling arcade game from Popcap. As with all good arcade games, the concept is simple and the gameplay is easy to pick up but difficult to master. Note: requires Java and Windows. There is no Mac version available.

You control a tank, which moves across the bottom of the screen in response to mouse movements. Planes fly overhead dropping bombs and weapon power-ups. You can destroy the planes by aiming at them with the mouse and clicking the left button. Holding the left mouse button allows rapid fire, which can make gameplay a bit easier. At various times in the game you will collect Nuclear Bomb power-ups, which destroy everything on the screen. These can be launched by clicking the right mouse button. They are rare, so you should save them until you are in serious trouble. The goal of the game is to survive an increasingly varied range of airbourne enemies until a boss appears at the end of the level.

Analysis: The graphics and animation used are well polished and pleasing to the eye. The sound effects are also well suited to the game. In many respects this game is similar to Heli Attack, with the main difference being Heavy Weapon uses mouse control for movement. This is something I thought should be different. When you are confined to shooting only in the direction that the tank is moving, difficult levels become frustrating and the fun aspect of the game slips away. Using the keyboard to move and the mouse to aim would provide the player with more control and the freedom to avoid bombs while aiming at planes on the other side of the screen.

Another aspect of the game that I thought could be better is the length of the levels. It takes a long time to get to the end of the level, and I believe the game would be more exciting, and hold interest longer, if the player could have a more immediate feeling of success. This could possibly be accomplished by providing shorter levels.

Overall, the game serves its purpose as an arcade game with addictive gameplay. The player will likely enjoy an increasing adrenelin rush as the enemies gradually become more aggressive.

PopCap games do tend to get released by MacPlay on the Mac and Astraware on the Palm, so look for those in the future.

Mac-arena - If it's something that I have to seek out and download just to play, I can find better uses for my time. I want cross-platform browser support, plain and simple. Make it easy for me to try and to buy your game(!)

By the way, the game looks and plays great on my PC. ;)

I'm not gonna download a special browser plug-in just to play this game. While Popcap may be free of spyware/adware, linking to games that require a download is potentialy risky.

At risk of what in particular?

Shockwave and Flash both require a download of a special player for content, too. PopCap's is really no different in that regard (apart from not supporting the Mac). And when you consider the high quality of PopCap's many offerings, the quick and painless browser install doesn't seem so bad.

Personally, I believe this game is of a quality that warrants a quick download if necessary. I've always enjoyed games that allow the player to progress by offering powerups and special attacks, and this game does a great job of doing so while subtly increasing the difficulty as the level goes on. Thanks, Brent!

I played this ages ago, and it's definitely enjoyable.

Since you've started reviewing other games its getting a bit annoying trying to figure out what type of game you are talking about. Would it be possible to have some sort of symbol or tag next to the news/game title that indicates what type of game it is (flash, exe, 3rd party installer, etc).

That's an excellent idea, gary, thanks for the feedback. =)

This is cool! One feature you didn't mention is the useful pause that happens when the parent window loses focus. Very handy!

jay: I wasn't talking about clone versions. MacPlay and Astraware release official ports of PopCap games. Bejeweled and Bejeweled 2 are a good example of this.

Brent said 'There is no Mac version available'. my original comment simply extends this to say 'but there might be in the future'.

If anybody knows any cheat codes for the pc version of heavy weapon atomic tank, please post them. I'm having trouble getting past level 5. What a bummer.

If anybody knows any cheat codes for the pc version of heavy weapon, please post them. I'm having trouble gettin past level 5. Thanks.