Note: Please be warned that players with a sensitivity to flashing lights or flickering images may wish to avoid this game. Dai Araiguma's just your average teenage raccoon. He's studying mechanical engineering at NLA-U, learning Nipponese on the side, and enjoys anime, americanime, and a bit of massively multiplayer online gaming on his cyberdeck until the power in his tenement goes out during a particularly intense heatwave. Things being what they are in his low-rent California neighborhood in a cyberpunk future, all the doors are on a network and he'd better come up with a way to cool off and get out unless he wants to spend the next day or two living as a pan-fried sardine. Heatwave, a short and endearing point-and-click furry adventure from Scavenger, takes place in the same anthropomorphic future as his Death Wore Endless Feathers. With the aid of Mujina, an adorable holographically-projected AI personality, help Dai find a way to survive the heatwave, and maybe learn a thing or two about friendship, community and self-reliance in the process in this brief tale that's just as unique and touching as it is imaginative. 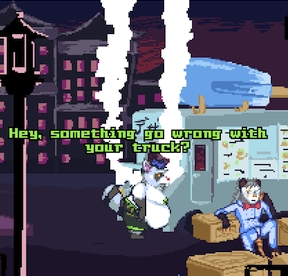 Point-and-click games usually have a pretty straightforward interface, but Heatwave was written using Adventure Game Studio and has a couple of small differences you should know about. The first is that AGS prefers double-clicks to single-clicks, and the second is that characters often get in the way of the onscreen items you're trying to interact with. And unlike most characters in gaming, Dai is particularly ample of frame so it happens frequently. That said, Heatwave takes full advantage of AGS' capabilities, including icon-based conversation menus when you want to talk to someone, and the ability to swap back and forth between Dai and some characters. But for all its quirks and technical highlights, its well-developed setting, cozy furry goodness (churr!) and likable characters the core of this title is, counter intuitively, its fundamental humanity. Feel-good games that leave you with a pleasant glow (and this is certainly one of them) are nice too, but this one really sticks out in that it isn't just some prefabricated rom-com you might find on late-night cable. Without giving too much of the plotline of this brief story away, Scavenger makes an especially relevant statement using a gaming format about who and what we are as people, and what do we even do with that? Heatwave is one of those titles that makes us stop for a second and ask <looks around cautiously, leans in conspiratorially and whispers> 'Can games be art?' We'll let you decide.

So painfully accurate...
As someone whom hobbies on the side, as a Furry Convention Theatre Leader...
There are too many people I know whom are like this >.>
Usually i'm inclined to give gaming feedback and helpful tips on what went well, what needs improvement and what ideas could be explored....

But for once... I've got nothin.
By the way, people dressing up as animals isn't the real problem, it's the drama they leave in their wake.
Now if you'll excuse me, I need to go help build a convention with a bunch of people who would rather talk about who's offending who and how we can work out our emotional differences than actually getting any work done.

I kept an open mind for most of it, but I still have some bothers...

What was the "lesson learned"? What was the deal with the fireworks? What was the "bonfire" that caused the heat? Why did Japan conquer America? Was the peacock guy in the game or in reality? Did he cause the fire? Was my game supposed to close after seeing him? Why does Dai only have 2 nipples?

It's not supposed to make sense because furries.
That's not a slight either, that's literally the reason.

I am having difficulties solving what I feel should be an obvious problem with the window.

I have opened the window with the chair leg. Dai tries to leave through the window, but cannot because their suit is too tight. Clearly they should remove it or get changed. I can find no way to do this. I thought about making it easier to get out by using the chair as a step, but no. The drawers don't seem to do anything either.

To get past that point,

That does it, thanks!

The worldbuilding here was really well done, I just wanted more of it :P Neat game.