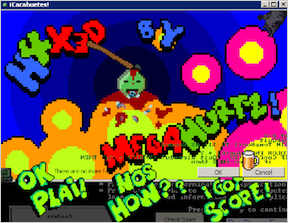 Making interactive Web art is a dangerous business, as Jason Nelson (Alarmingly These Are Not Lovesick Zombies), Edmund McMillen and Florian Himsl (Coil) can tell you. When you dabble in the language of games, you risk the wrath of gamers, who despite their lip service to "innovation", are often terrified by anything really experimental. There is a contract to uphold when you make the jump from videos to games. When the experience requires our input, we want there to be clearly defined goals and characters, so we're not just clicking around haphazardly like gullible sheep, hoping to be blessed with random visual trinkets. We hate feeling stupid, and that's what art sometimes does when it forces you to participate. It makes you the dumbest person in the room, blindly fumbling for meaning like a Nickelodeon game show contestant fishing for prizes in a bath of green slime.

So one possible MO for developers trying to smooth out this prickly transition is to make something like Haxed by Megahurtz, a game so cracked, so exuberant, so imbecilic it could not possibly be trying to outsmart you. Hating it would be like slapping a candy raver—part of you might want to, but it's easier to just go with the flow and accept her offer of Sweet Tarts and a back massage.

Haxed by Megahurtz is the deformed brain-child of Alien Melon, whose members have been responsible in the past for Blue Suburbia and the hyper-polarizing Alexis, but it is more of a playable game than either of those titles. The hero is a manic green blob named Minibyte, whom during his nap-time in cyberspace has been haxed—quite literally—with an axe wielded by malicious blue fairy-things called Megahurtz. Enraged and bleeding important data, Minibyte goes on a murderous Megahurtz rampage, devouring as many of them as he can sink his pac-man choppers into. 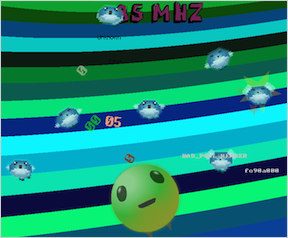 I may have gotten one or two details wrong there, but it doesn't really matter. All you need to do is catch the flying Megahurtz (again, they're the blue fly-like creatures) with your mouse, drag them over Minibyte (he's the crazy screaming green thing), and release. And then watch the carnage. You win by increasing your MHZ count to the goal set for each level, and you lose by letting it drop to zero, which it will do over time if you don't feed Minibyte fast enough. There are three levels proper, plus a rather substantial postscript that somehow involves armageddon and a dancing budgie.

But the interactive part of the game is almost completely insubstantial. What is impressive here is the onslaught of stimulus being thrown at you. The roots of Haxed are that of a hyperactive pixelated music video drenched in gaming and internet culture references. The beats are mixed cleverly on the fly according to Minibyte's mood, be it hungry or homicidal. Despite Alien Melon's aggressively lo-fi ideals and punk stylings, this is a technologically solid piece of work.

Whether you'll actually like it or not is something I can't possibly tell you. This is going to be a subjective experience through and through, depending on your sense of humor, your tolerance for color contrasts, your taste in music, and a thousand other factors. For my part, they had me hooked at the loading screen, where a black-and-white tabby with outstretched arms stands on the moon and proclaims the file you are loading to be "Diiiiiiiiiiiiiiiis big!" But your mileage may vary. Haxed is not for everybody, just as Trix is not for rabbits. If you're not feeling the vibe, try pounding a Red Bull and come back to it.

At the very least, I can recommend Haxed by Megahurtz as an operation in expressiveness. Without worrying too much about the social implications: this game was only possible at this exact moment in history, when people's attention spans are being digitally scrambled daily, and Flash has helped wrest game creation from the control of large companies into the hands of regular people. This is what we've become, where we can take something as nonsensical as Haxed by Megahurtz and understand it as a story, however shallow and/or obnoxious.

I found it thoroughly entertaining, but any Alien Melon members who have found this review are probably laughing at me, rightly, for devoting so many words to it. I mean, I'm calling it Web art, and it's making cow noises. Maybe the point was to make me feel stupid after all.

Actually, in contrast to games such as ATANLZ and Coil, this didn't feel like a "game as art" to me. It seemed a bit too much like a poor game trying to pass itself off as art, because not only the gameplay but also the art was very repetitive and uninspired.

Essentially? It failed to interest me either as a game or as art.

Why do I feel like I've just been had!

How many calories are there in a Megahurtz?

I thought it was awesome. The second game (TOTAL VOLCARNAGE!!!) after I won the first game was more entertaining, though, in my opinion (I think I was blowing up cartoon turnips with a cannon?). Ka-bewm indeed.

In movies that purposefully make little/no sense, the viewer gets to theorize and speculate as a viewer; in a computer game of such a kind, you're a player instead. You put some sort of effort into it, and thus could come off as disappointed or worse, stuck.

Once again, I'm commenting before playing it; I just hope it'll turn out to be the silly kind of nonsensical.

... Yes, that did in fact turn out to be the silly kind. Well done, you people who made this thing. I was thinking of suggesting a pause feature, but that probably isn't necessary.

OK, I truly did not grasp the full extent of the WTF factor until the (first) game ended. I recommend you get at least past the first three levels before passing judgement.

Unfortunately, I'm still stuck at the controls screen. I eventually managed to find a way to connect my PS2 controller to an unused USB port (that is where it goes, right?) but although the game's controls screen shows that I should press "Start" to play, my controller's Start button is no longer working.

Darn, and it looks like a fun game. Was I supposed to use a PS3 controller? I don't have one yet...

That... really hurt my eyes @[email protected] Interesting game though...

Oh, gosh. I started this game, and when it got to the 'Eats 200Mhz' or something like that, my laptop shut off, seemingly by itself. I freaked. Then I figured out that it had run out of power. Phew.

Okay, I tried a different controller and it works now. It was rather fun, but I'm still confused about some things:

How did Igor become trapped?

Does anyone know how to rescue Igor?

Does Igor actually have someone else trapped with him, considering that the one menu item he mentions being trapped in actually turns out to be two menu items?

Where do you insert the coin?

What role does the mysterious bukkit play?

Is there any way to find out what actually happens to the bukkit in the ending?

I kept clicking an ok button, then it blew up lol

For sure, an expression of sensory overload....

this much randomness reminds me of the first monty python game, if you added toejam and earl's graphics.

well I loved it, it was an awesomely cracked out piece of interactive artwork. A+++++ would buy from again.

lulz at spacecat waving in the top right corner.
If you mouse over him it shows him flying through space.
I played it for the ending, actually.
I'm always excited when Armageddon is involved, and especially when it's caused by a budgie.

What was that anyway? It looked kinda like a drunk 5-year-old's mind... though I did like the beginning where it showed the cat and the words: 'The file diiiis big!' =)

Dadaism in Flash games? Yes, please. We need more of this.

I think my eyes are bleeding, but I can't see for all the blood. what just happened to me? I feel violated.

OMG some guy fell for the controller thing LOLZ!!!

"I mean, I'm calling it Web art, and it's making cow noises"

And I thought that nothing could make less sense than something by Jason Nelson, but I think I've found something.

Seriously though, although it's completely nonsensical, stupid and confusing, that's completely the point. Some of the things were brilliantly poking fun on how ridiculous computers and the internet can be, like the

blue screen of death level, and the ridiculous story

Saying that, however, I don't think I'll ever play that again.