Considering Slender's breakout success as the fastest way to regress to "monsters in your closet are REAL", it takes considerable guts to release your own version and call it "The Real Slender Game", but that's exactly what ParanormalDev, the makers of the free indie first-person horror adventure Haunt have done. Things are looking bad for you right off the bat when you awaken in a mysterious, rainy forest at twilight with no knowledge of where you are or how you got there, and you've got no choice but to follow a nearby posted map and hope it leads you to someone who can help you. Of course, the even worse news is that there's something in the gloom with you whose definition of "help" means "destroy your sanity as it hunts you and then do unspeakable things when it finally catches up with you". And with night falling and only a flashlight as your guide, it's not looking good. Man. The outdoors sucks. 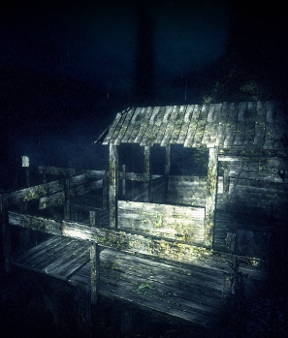 Use the mouse to look around, [WASD] to move (holding [shift] to sprint), and [tab] to open your folder to view the documents you collect. [E] interacts with things, [F] turns your flashlight on and off, and you can use your mouse's scroll wheel to change the intensity of the beam. (And if you want to play in windowed mode, hit [ALT] and [Enter].) As you explore looking for help, you'll find documents and photos laying around that you can collect, as well as keys to open doors and batteries to keep your flashlight bright. The area you find yourself lost in is fairly large, but depending on the difficulty setting you've chosen, you can find park maps throughout the area that will serve as handy reference points as to where you are and what's around you. Of course, not everything is on the map, and if you really want to uncover the mystery you'll have to venture off the beaten path. Watch the skyline for changing shadows and you might be lead to something... interesting. Oh, don't be a baby. When was the last time anything horrible and mentally scarring ever happened to someone who wandered off into the woods at night?

In a lot of ways, in its current incarnation Haunt is almost best described as "Slender, but fancier". It's sort of like those old teenage dramadies where the nerdy guy goes away for summer and comes back a tanned, golden-maned god. Clearly the team behind this has a lot of talent, and the game looks stunning as a result, apart from the sickening "my legs are made of slinkies" lurching the camera does when you run and the "am I being electrocuted?" flash that oddly represents lightning. It takes a while for anything to really happen, but the atmosphere is so dark and disorienting that your tension only increases with each passing second because you know what's inevitably coming... just not when and how. Of course, the "when" might be a bit too far away for some players, but bear in mind your danger here depends on the progress you make and the things you do. Whether its actually scarier than Slender is largely going to be a matter of personal taste, since Haunt has such a drastically different presentation. 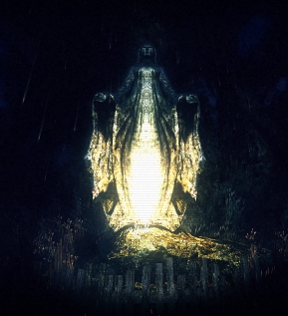 Though Haunt shares gameplay almost identical to Slender, largely coming down to trying to collect all the things you can before You Know Who gets ya, it feels more like a complete adventure. It's a lot more intriguing because it does a better job of leading you by the nose towards the promised payoff of a story, but the writing is a little stilted and bland. The potential danger of providing a backstory to a monster like Slender is ruining a lot of that terrifying ambiguity and sense of the unknown that makes the horror so much sharper, and Haunt's exposition and concept might be a little trite for some. Of course, since the game is still only in Beta and the developer promises to flesh it out even further beyond "get stuff, try not to die", all this could change eventually. Literally, since they've promised to pull out all references to the iconic creature if "anyone manages to prove ownership".

In a way, I almost hope this happens, since Haunt feels like it would be a stronger experience overall if it weren't deliberately reinterpreting an already established game and creature. There's so much more room for creativity and freedom when you're working with your own ideas, and the team is clearly talented enough that they could pull off a frightening experience with its own mythos. As it stands, ParanormalDev's "we don't care" attitude combined with calling their work "the real Slender game" might leave too much of a sour taste in some player's mouths, even though they've said they meant it as "a more fleshed out game with Slenderman" rather than implying it was the definitive and only true Slenderman title. For the work of three people in two weeks, Haunt is still a pretty impressive achievement that could only get moreso as time passes. It's a creepy, mysterious, rain-sodden trek through unknown and hostile territory with style and atmosphere to burn. And hey, you've got company, too! And so nicely dressed. Isn't that nice?

I actually have no problem with the Slenderman being used by multiple games. An internet phenomenon, with obscure origins, strange upbringings, and a that happens to have one break-out game....but I think it has more "power" as an "unfound" entity, if you understand the Dark Tower reference. To tie Slenderman to a single game makes it known, somewhat. But as an "unfound" entity that can pop up from anywhere, at any time...

It's incredibly difficult to add something to a culture in these days. When you think of the "horror" genre, there are some staples and many outliers. To make an outlier is easy. To make a staple is MUCH harder. To compete with vampires, werewolves, Frankenstein monsters, zombies, mummies, etc., you CAN'T have a single owner. What if the heirs of Bram Stoker popped up and claimed ownership to vampires, shutting down all other media about it? Twilight? True Blood? Vampire Diaries? They couldn't, of course, but there's the point: A "creature" that can exist outside of the realm of ownership can become a staple of the horror genre.

That's what I hope to see out of the Slenderman. That any artist can pick it up and say, "gee, this is interesting, how can I add to it?" And yes, there will be failures. There will be those who will take it in the wrong direction, try to humanize it, explain it more than is warranted, give it an origin story, etc. That's inevitable. Look at what Twilight did to vampires! For shame. But for all that, someday someone will make a true Dracula movie to restore the true nature of the vampire.

So yes, I think that if handled properly, a Slenderman creature can be handled by multiple developers. I do hope, like Dora said, that they stay away from Slenderman's backstory. The greatness of the creature, and what would make it a "classic" monster to stand with vampires et al, is that uniqueness that it has no explanation. It has no reason. It has no weakness. There are no weapons or spells to stop it. There isn't anywhere it can't find you. There is only the horror of it coming after you. It is eldrich terror, in a way, the unreasoned terror of a bug (if a bug could feel terror) as a child toys with it before pulling off its limbs, and we need more of that, and less "romantic horror."

Pros: Much nicer graphics than Slender - nice graphics in general, at that. Pleasantly atmospheric title screen music. Seems to have more solid gameplay and even plot behind it.
Cons: If "night" isn't the default time of day it takes place in, then what time IS it? Slenderman himself is kind of ridiculous. From lurking, staring, silent presence, he's gone to being a generic scary baddie who charges after you like a rhinoceros and has, of all things, an inexplicable glowing head. It's not even remotely creepy. "Slender" made the right choice in making sure the player never saw him move, and in keeping his appearance vague and austere instead of... this.

Oh, I forgot to add to the cons list: The horrendous grammar will have to go before/if this gets out of beta. That's almost as mood-breaking as Slenderbulb. I'm not talking about subtle little things like split infinitives.