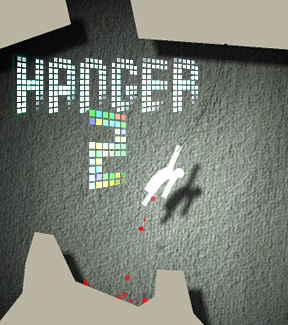 It must be rough to be so fragile that even a bump against a ceiling will remove precious body parts. And yet that's the situation before you in Hanger 2, a small yet fun and addictive physics game by A Small Game.

Although similar in concept to the mouse-controlled Double Wires, this game is entirely keyboard controlled. Use the the [arrow] keys to swing left and right and to climb up and down the rope. Use [space] to release the rope and [space] again to cast a new one. The [Enter] key is used to begin a new level and advance to the next. Don't hit the ceiling or other scenery or you might wind up losing a body part or two or three. Get past the exit line to move on to the next level. Points are scored for finishing the level and collecting stars, while points are deducted for losing body parts and using ropes.

If you have played the original Hanger, featured here at JIG in a previous Link Dump Friday, you'll be glad to know much of the fun has been retained while much of the frustration has been removed. Whereas before the rope would sometimes stick in the unlikliest of places or not stick at all, the rope in Hanger 2 is much more dependable and thus creates a much more enjoyable experience. Lots of color schemes, textures and level design changes create just enough novelty to push this game into addictive territory throughout all 23 levels. So hang in there, and try not to bump your head.

Mid-game ad. The utmost of fouls has been committed.