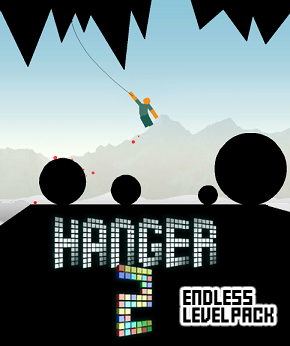 Feeling like just hanging around this afternoon? Then A Small Game has got you covered with a fun dose of physics action. Of course, you might lose a couple of limbs in the process, but it'll still be better than just chilling on the couch watching Maury. It's Hanger 2 Endless Level Pack, and it has a ton of good grappling fun. Starting where the originall left off, the Endless Level pack features 23 side-scrolling caverns for you to swing through and smash into at high speeds. With the mechanics mostly the same, its up to the architecture to do much of the heavy lifting, and overall its up to the task. The levels are longer and more challenging than before. Most have a palpable sense of atmosphere, which is quite cool. Whether it's spooky, surreal, humorous, or retro, you get the feeling that the art department was really having fun putting this together. Also included is the titular Endless Mode which, while not quite the sequel to Double Wires that we're still waiting for, at least features you being chased by a the Grinning Colossus's second cousin. That's gotta count for something. In short, Hanger 2 Endless Level Pack is an expansion that's willing to explore new areas of a concept, while still remaining familiar to what made it great in the first place. Go out on a limb and try it!